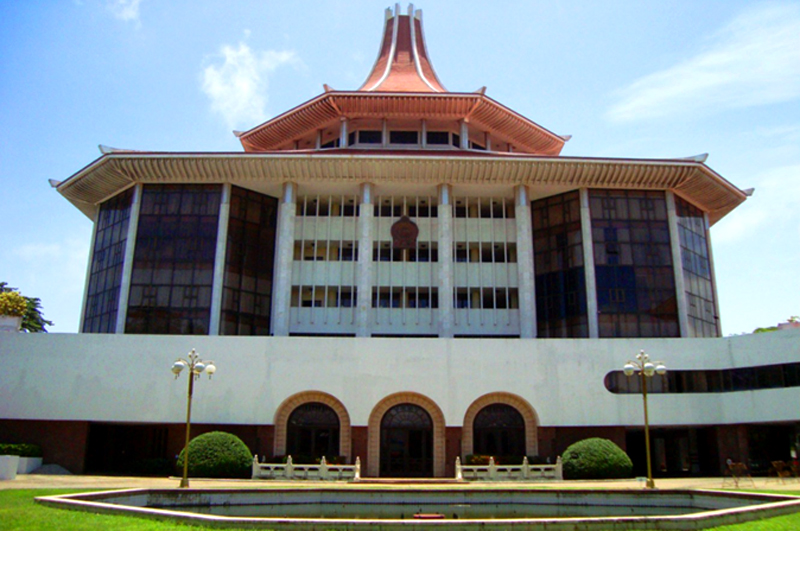 The President has appointed a new Commission to look into the report on the Commission to Investigate Political Victimisation(PCOI) and find ways of implementing the recommendations of the latter. This move has led to the cry of blue murder in some quarters.

A coterie of men in black — not representing the Bar Association certainly — but on behalf of themselves and a group they claim to represent, immediately went on attack mode. These attacks were also echoed by some of the SJB opposition’s agitprop brigade.

It’s showtime, folks. These people say that the new Commission to implement recommendations of the Commission on Political Victimisation (PCOI) is in contempt of the Attorney General’s Department and the Courts.

Why so? They say that in some 70 or so cases, the PCOI has recommended that the accused be discharged and steps taken to investigate those that initiated these prosecutions. However, their view is that all of these cases were sent to the Attorney General’s Department which then decided on the charges to be made, or whether indictment is to be filed.

In the first place there is no such thing as contempt of the AG’s Department. It’s not a Court of law, and its findings are not sacrosanct and can be subject to criticism subject of course to the prevalent laws of libel, etc.

The broad contention, however, of these dissenting voices is that a Commission — a third party — is purporting to interfere with legally constituted prosecutorial and judicial process.

That being the case, it is reiterated, the legal position presupposes that if there is a malicious arrest of an individual or a group of individuals the entire prosecutorial process can be subject to challenge. Notwithstanding the fact that the legal process is ongoing; such malicious abuse of legal process, can be overturned.

That makes sense, doesn’t it? The Court bases its judgement on the basis of the facts and evidence produced before court by the prosecution. If the prosecution itself has been initiated with malicious intent, the Courts obviously cannot be blamed for proceeding with a case based on that malicious abuse of process because the case, from the very get-go, was prosecuted with malicious motives.

A lawyer by the name of Ghazali Hussain makes the assertion that those who are charged are set free and that those who initiated the prosecutions are being investigated as per the recommendations of the Commission. He reveals this fact as if he has just discovered the craziest new thing on the planet.

This writer shall not cite all of the case law here but those who are interested can peruse the relevant recorded law on malicious prosecutions and malicious abuse of procedure and malicious arrests, and the lawyer aforementioned could also avail himself of a refresher.

Do those people who decry the Political Victimization Commission (PCOI) and the Commission to implement its recommendations, realise that they are talking about a time there was a plethora of politically motivated malicious prosecutions/malicious arrests? Are they unaware that there was an MP of the then government who was caught red handed — poetically on his own tape — having recorded conversations in which he is goading police officers to fix political victims, or talking to judges as well about fixing cases? Are they unaware that several of these issues are now the subject of investigation?

They can’t be unaware that almost the entirety of the then Opposition’s campaign was based on ‘golden horses’ that never materialised, Lamborghinis that were eventually traced to private citizens much remote from anyone in government — but which were weaponised as totems of corruption?

They couldn’t have forgotten or been unaware unless they landed from Mars recently that swimming pools were dug up in search of stolen loot, only to yield two worn out pairs of slippers.

Prosecutions which were initiated at the level of the police — not the Attorney General’s Department — were grossly influenced by the malicious intent of those such as the aforementioned MP who was caught on tape on more than one occasion trying to skew prosecutions negatively against political opponents.

Gazali Hussain says that he worked for the AG’s Department and we have no doubt he did so, but with great respect, he would probably remember a colleague by the name of Suhada Gamalath. Gamalath, now no longer with the Department went on record on national television saying that he was under tremendous pressure by politicians — operating from Temple Trees no less — to go after political opponents by initiating prosecutions when he had no reason to prosecute. Gamalath said he had no cause to prosecute these targets, but yet there were politicians who were banging on tables trying to coerce him into doing so.

Or is he — an officer of the AG’s Department with no partisan taint — trying to protect people against malicious prosecutions?

That’s absolutely what he was trying to do, apart from showing everybody the extent to which he was shocked by the obnoxious demands made on him to victimise persons against whom palpably there was no case.

Are these protesting lawyers saying that those who attempted to influence the conduct of due process, such as through police and other agencies of state, should go unpunished?

It’s not those agencies of State that should be targeted for punishment, but those that initiated the malicious prosecutions. Where is the injustice in that?

It’s also a fact that many of those against whom malicious prosecutions were initiated were targeted due to successful prosecution of the battle against the terrorist LTTE, a group officially branded terrorist in European and other world capitals.

The army was also separately targeted for malicious prosecutions. Army morale was at breaking point as a result. These men and women fought a heroic battle and here they were, being lined up to be fed to the wolves.

Had nothing been done to reverse these malicious prosecutions what may have been the outcome? The inevitability of a military style takeover as in Myanmar? What happened in Myanmar cannot be endorsed or condoned. But, if (it happened) in a country such as ours, when a heroic military was being pushed to the wall for successfully prosecuting a terror group, something would have given in the end. Even the people of this country may have endured a military putsch under the circumstances because this is not Myanmar. The people knew the military was heroic; they would understand if the military strongly reacted to a string of malicious prosecutions against them.

Do the lawyers who are against implementing the PCOI findings want that? Or do they want a peaceful resolution to these issues by way of the PCOI recommendations?