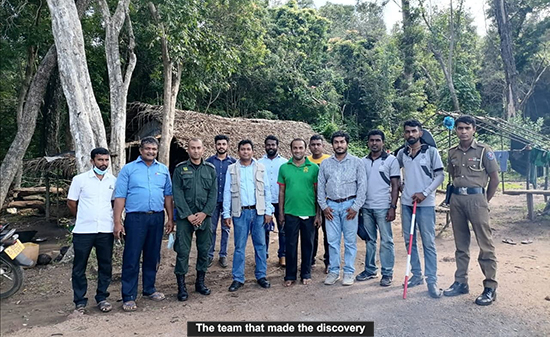 Archaeology Department officials have unearthed a granite slab inscription buried from a land that is believed to be the site of the former Kurindi Sirisangabo monastery popularly known as Kurudumale Vihara at Thannimuruppu in Mulaithivu.

A section of the slab inscription jutting out of the soil was first noticed by a team of officials of the Survey and Conservation Unit of the regional archaeological office in Vavuniya and archaeologists working in the Mulaitivu zone.

They informed the Department of Archaeology, Colombo, of their findings, and a team of officials from the Inscription and Numismatics Division to Mulaitivu was sent to excavate the site in the Kurudumalai forest. They uncovered the slab inscription and are currently engaged in copying the inscription to tracing papers.

Officials said that the inscription was about 50 lines long and further excavations there would yield similar artifacts that could help reconstructing the past of those regions.

The team of excavators had been assisted by the Chief Incumbent of the Kurudumale Temple and the Army deployed in the area.

On an earlier occasion some inscriptions were found in the same area but were destroyed by vandals. Treasure hunters, too, have damaged certain sites with inscriptions.