Any hope for an Opposition that martyred itself? 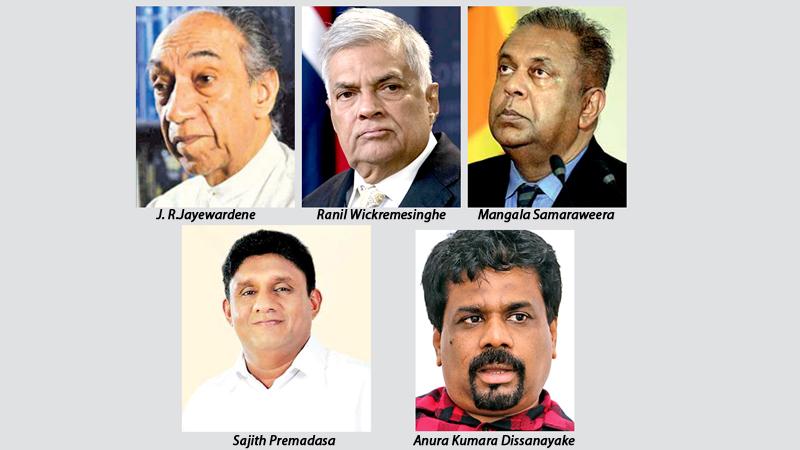 The failure of a political project in this country can be predicted with certainty by the number of persons who have martyred themselves successfully for the political party that began that project.

J. R.Jayewardene the old fox, had for too long endured the dominance of the Senanayake clan when after the abject defeat of 1970, he finally assumed leadership of the party.

Shortly afterward, Dudley Senanayake passed away unexpectedly and after JRJ had said ‘Good night sweet prince” at a funeral marked by surreally large numbers of mourners, he was settling into taking full control, when Rukman Senanayake wanted to martyr himself for the party with a sudden putsch for leadership.

From nowhere, he launched his leadership bid, his only qualification being that he was a Senanayake — albeit a shy and hapless one, in the forty fourth carbon copy of the originals DS and Dudley. JR moved so quickly and so ruthlessly that the weak, girlish Rukman didn’t know what hit him. He was steak tartar before he could say martyr, and that was the end of that. He couldn’t even lick his wounds let alone claim he was a martyr, because he was so quickly smote by JR’s sword, and consigned to the politics of the dustbin.

But whenever a political persona successfully martyred himself or herself for the party, there has been trouble there for the party— and this can be considered a rule of thumb.

These days, Mangala Samaraweera has successfully martyred himself for his party. Make no mistake, at least as things stand, Samaraweera is not a successful politician. He is not even in Parliament, having been unable to face the reality that he will lose his seat.

But then he has basically martyred himself for his party. He says he has opted out of the political process, but that he knows best how the country is run. There isn’t a week that passes in which he doesn’t offer his unsolicited advice to the powers that be.

But he says, he does all this while having opted out of active politics. That’s what’s called martyring yourself for your cause — your party. You pretend to go through all types of sacrifices, trials and tribulations, and make it appear you are doing all of it for your political cause, your political party.

He martyred himself for his political party this way and look where it has got both parties he wants something to do with, the SJB and the UNP. They are both in an absolute, awful mess.

Ranil Wickremesinghe has martyred himself for his party. He seems to be saying — without quite saying it — that he has to be lifetime leader of his party, and that he has to sacrifice himself to that fate. That’s called martyring yourself for the party.

But since he has offered himself for his party in this way, look where it has got him, and his UNP.

His party, the oldest one in the country, has become a non-party. It’s a shell, a useless bauble, but the man who has martyred himself for the party continues to be at its helm.

If there is any predictor of political failure or success in this country, it’s the state of the individual political party.

The TNA is rife with internal strife, barely concealed, and it’s a shell of what it used to be. The SLFP suffered the sudden internal insurrection of 2015, and is now a shadow of its former self.

The SJB is a new political outfit, but already it seems to be saddled with one leader, who has so far given leadership in two national elections and lost badly in both.

Say if it was the United States, and you lead your party to one election defeat nationally, you are turfed out from any leadership post.

Who even remembers Al Gore and Hillary Clinton, who both lost once and were given the marching orders, despite considerable name recognition. By remaining as party leader, Premadasa Jnr. seems to have martyred himself for the party as well. Not that anybody is clamouring to take his job — nobody fancies the chances of the SJB much, at any future outing.

Nobody, except Champika Ranawaka that is, who desperately wants a shot at the presidency but who isn’t trusted by anyone because of his cloak and dagger past, and his ruthless, naked ambition. The same goes for the JVP. Several national government election outings under the leadership of Anura Kumara Dissanayake and the party’s fortunes have declined drastically — leave aside these guys winning anything.

So is the JVP the dynamic party it pretends to be? Is it a party that’s so dynamic that it has an atrophied leadership that seems to have martyred itself at the party’s godhead?

Anura Kumara Dissanayake has lost one too many elections at the helm of the party, and has nothing new in his bag of tricks to propel it forward. He has been droning on the last seven years or more in the same fashion — blaming everybody except himself and his party for everything around him.

But then again, it’s easy to find out why nobody buys that line. The party leadership is stagnant despite serial defeats. Not just the leader, the entire party has martyred itself.

Their constant complaint is that they are the only pure as driven snow political party that represents the working poor, but that fact is never appreciated by the voter.

In other words, they say they are the long-suffering politicians, who are putting up with all the defeats and ignominy because they are all in it for the masses.

This is the definition of political self-martyrdom. There is no self-effacement, just self pity. It’s a common trait with most Sri Lankan party leaderships, but at least with the JVP we would have thought it would be different considering that it’s a party that bleats perpetually about doing the proper thing.

To go back to where we started, the fact remains that a struggling party’s fortunes depend on frequent, efficient and ruthless leadership transitions.

J. R Jayewardene took over the UNP and transformed it from the fiefdom of the Senanayake family, and viola, everything changed overnight almost, with the UNP being able to fill that space in the ‘public imaginary’ that had been created by the disillusionment with Sirimavo Bandaranaike’s SLFP, which was wedded to reforms that were destined to fail.

Even Chandrika Bandaranaike was able to lead the SLFP to victory after she engineered a leadership change and propelled herself to party leadership after its long winter of discontent.

If she can do it anybody can — but the problem with most political leaders of the assortment of opposition parties we have, is that they insist on martyring themselves. Eventually the party dies with them.

Even the old leftists that petered out would have had some political capital left if their leadership had not tried to martyr itself on the godhead of the SLFP and thereby lose half its legitimacy as a genuine left movement.

When they extricated themselves from that mess it was too late, and even then, the old guard continued to lead the party, and the less said about that situation the better.

There is no right-wing politics of this country at this time to speak of. There are martyrs and regular specialists at teeth gnashing. Sadly for the opposition, that’s a recipe for a circus, certainly not one for a political resurrection.