Another imperial debacle in Afghanistan, but another bloodbath looms 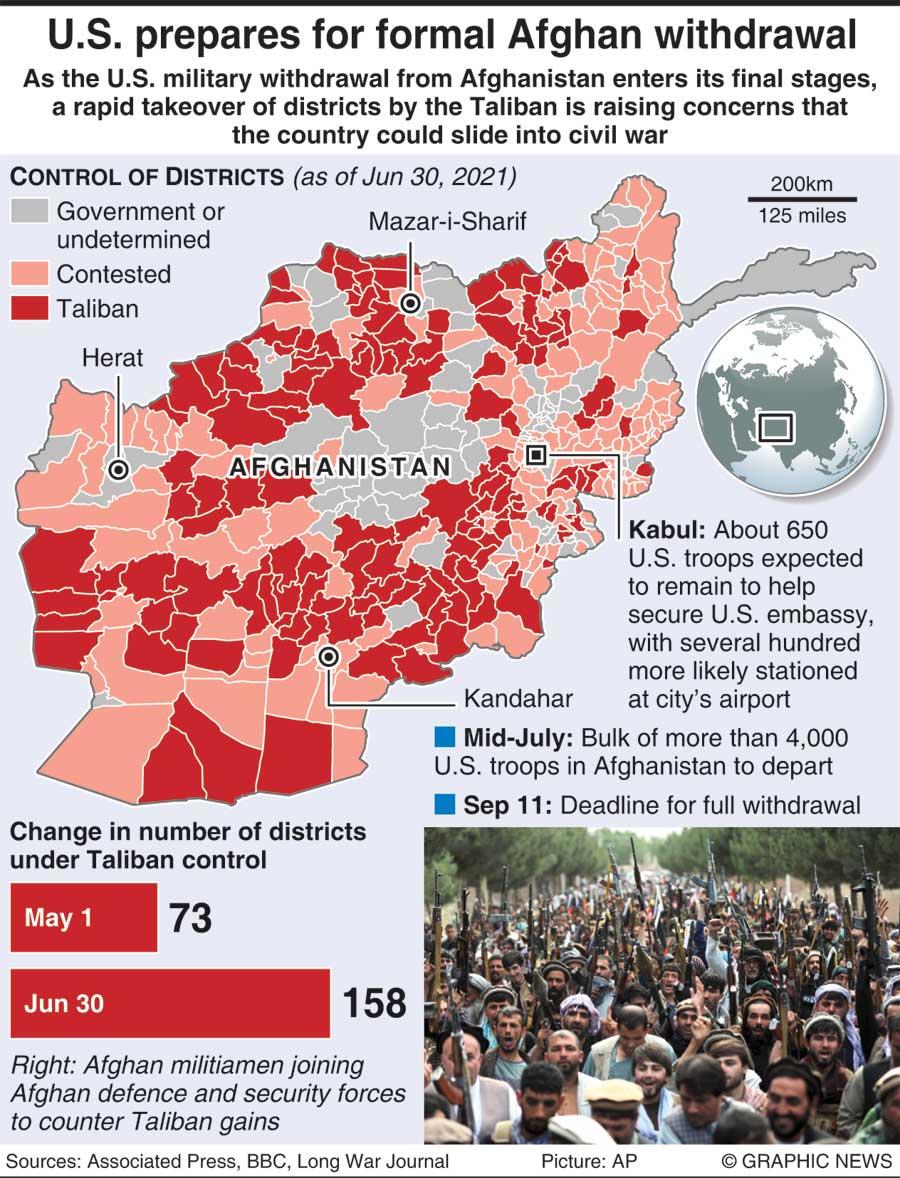 In scenes reminiscent of the United States’ humiliating exit from Saigon at the end of the Vietnam war in 1975, US soldiers left the Bagram military base, 70 km away from Afghanistan’s capital Kabul, this week in a move that signalled that the withdrawal of the US-led coalition forces will be completed well ahead of the September deadline.

In what was history’s biggest and hastiest helicopter evacuation operation, the last of the Americans and their South Vietnamese supporters were evacuated as Vietcong guerrillas and North Vietnamese Army troops stormed the gates of Saigon in April 1975. This week as the US soldiers left the Bagram base stealthily, the Taliban, with whom the Americans have been at war since October 2001, are sweeping across Afghanistan in their advance towards Kabul.  If only the walls of Bagram base could speak they would tell us how the facility was used by US troops to torture suspects before they were sent to US-run gulag prisons in Guantanamo Bay to remain their without trial, denied of rights granted to prisoners of war under the Geneva Convention.

Situated in a strategic point where West Asia meets Central Asia, Afghanistan has seen many an imperial army retreating in shame without achieving its military objectives. Hence Afghanistan has earned the sobriquet ‘the graveyard of empires’.  During the Anglo-Russian Great Game to subjugate Afghanistan, English poet and colonial soldier Rudyard Kipling wrote a famous poem that described the defeat of the British Army after just one soldier survived the botched campaign to capture Kabul. Here are a few lines:

“When you’re wounded and left on Afghanistan’s plains,
And the women come out to cut up what Remains,
Jest roll to your rifle and blow out your Brains
An’ go to your Gawd Like a soldier.”

Without militarily defeating the Taliban, the US withdrawal is bound to plunge the country deeper into violence which the Afghans have been forced to put up with since the 1979 Soviet invasion.

The US withdrawal is taking place while peace talks are going on in Qatar’s capital, Doha, between Taliban and Afghan government representatives. But this is a charade that will only legitimize the Taliban takeover of the country with de facto international recognition. Whether the Taliban will honour the deal is doubtful.

In their previous avatar, the Taliban were ruthless hardliners.  Ignoring the sublime spiritual message of Islam, the Taliban misinterpreted Islam to justify their hold on power.

Their peace agreement with the US after 20 years of war has not made them less hardline. Worked out with Qatar’s good offices in February last year, the agreement calls on the Taliban to sever ties with international terrorist groups and to prevent them from using Afghanistan as a base to carry out attacks against the US.

Notwithstanding the peace agreement with the US and ongoing Doha talks with the Afghan government of President Ashraf Ghani, the Taliban are now controlling more than three fourth of Afghanistan. As the Taliban capture district after district, the US-trained Afghan government troops are on the run leaving behind US-supplied weapons. Some have fled to neighbouring Tajikistan, while there are also reports the troops are joining the Taliban.

While the unfolding scenario exposes the weaknesses of Washington’s Afghan strategy, the less spoken story is that Afghanistan was not the main target of the George W. Bush administration which was in office when al-Qaida terrorists hijacked civilian planes and used them as missiles to attack the Twin Towers in New York and the Pentagon in Washington DC in September 11, 2001, a.k.a. 9/11.

On day one in office as President in January 2001, Bush, after a meeting with his team, called to a side his new Defence Secretary Donald Rumsfeld to tell him to prepare a plan for an attack on Iraq. When 9/11 happened, Bush wanted an immediate military attack on Iraq though it was al-Qaeda enjoying the Taliban’s sanctuary in Afghanistan was the main suspect.

The attack on Afghanistan was not on Bush’s agenda but it was an essential component of the Neoconservatives’ Project for New American Century – a think tank which devised a strategy for the US to dominate the world through military bases and the control of the world’s resources.

Rumsfeld who died last week was one of the main ideologues of the neoconservative project.  The Neoconservatives wanted Afghanistan invaded and a puppet government set up so that US companies could take hold of the Caspian and Central Asian oil fields. Afghanistan lies between the landlocked and resource-rich regions and the Indian Ocean warm water ports in Pakistan.

When the US company, UNACOL, which once employed Bush’s National Security Advisor Condoleezza Rice, was planning to set up a pipeline to transport the Caspian oil, the then Taliban government enjoyed the de facto recognition of the US government. But later, the Taliban double-crossed the Americans and wanted to give the project to an Argentine company.  The pipeline project, however, did not materialize because Russia, years after the US war on Afghanistan, emerged strong enough to coerce Central Asian countries to use the existing Soviet era pipelines to export their oil and gas via Russia to Europe.

With Neoconservatives cajoling Bush to launch the Afghan war, a US-led coalition consisting of friendly countries invaded Afghanistan with inside help from the Taliban’s rivals – the Northern Alliance.  This came after the Taliban rulers refused to extradite al-Qaeda leader Osama bin Laden to the US.

The Afghan war was christened the war on terror. Wherever the terrorists were hiding, “we are going to smoke ‘em out,” Bush declared as the Americans still recovering from the shock of 9/11 gave him a carte blanche to do whatever necessary to make America safe again. Bush, however, misused the public trust to invade Iraq which had nothing to do with 9/11.

With Bush’s focus being Iraq, the Afghan war received less importance. It was only Bush’s successor Barack Obama who gave the Afghan campaign some direction with a possible exit strategy. The Obama administration eventually succeeded in locating al-Qaeda leader Osama bin Laden’s hideout in the Pakistani city of Abbotabad and got him killed in a well-executed US Navy Seal operation.

It is now left for the Joe Biden administration to preside over the US withdrawal from Afghanistan before the situation becomes more complicated or worse, with China and Russia showing an increased involvement in Afghanistan.

After nearly 200,000 Afghans have died, millions wounded or displaced, a staggering two trillion dollars was dumped on the war and some 3,500 US and coalition soldiers paid with their lives for the myopic adventure of the Bush administration, the US leaves Afghanistan with little or nothing to show, while paving the way for more bloodbaths under the soon-to-be set up second Taliban regime.