And the self-appointed white school principal swishes the cane… 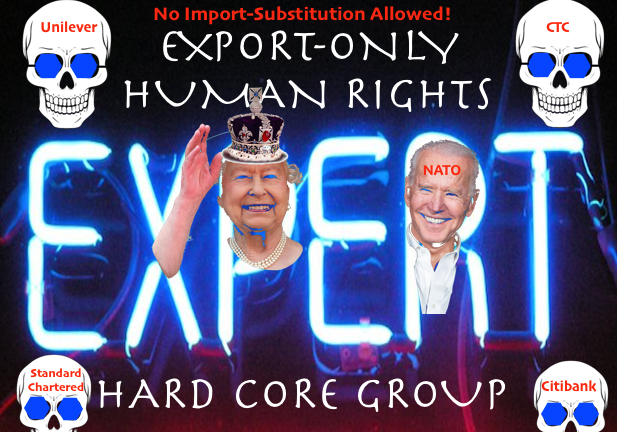 It’s that time of year again to go see the self-appointed white school principal wagging a cane (made out of ‘debt’ and ‘human rights’) behind their back:

• Fidel Castro met Chilean President Michelle Bachelet (now UNHCR Commissioner) in February 2009, and a day later wrote: ‘The fascist and vengeful Chilean oligarchy is the same which more than 100 years ago robbed Bolivia of its access to the Pacific and of copper-rich lands in a humiliating war.’ (see ee Sovereignty, Authoritarian)

• ‘Human Rights Experts’ (almost all well-funded) say Sri Lanka’s ‘denial’ of human rights will engender a ‘pandemic’ of impunity (this from countries who invade other countries at will): ‘if Sri Lanka is allowed to get away!’ – This is old white slave-hunter talk…

Then a study by Citibank (SL sovereign bond owner) says Sri Lanka is in denial about the economy (a report not available to mere mortals but only to ‘special economists’). One other denial is that Covid is more widespread than admitted…Hmmm! Thrice denied – Sounds biblical!

• Yet the greatest denial of all is this: These Geneva threats, etc., aim to deny Sri Lanka getting on with the giant strides needed towards economic independence. The merchant mafia, with their constant media barking for imports & exports, are doing their best to prevent our recapture of the home market as the basis for industrial production.

Just as debt bondage became a substitute for the slave owner’s whip, the white-master’s media cry of ‘debt payment’ is now the modern form of enslaving whole nations. Debts, no matter how useless the loans were, could easily be repaid by modern industrialization. But this they also won’t allow.

This ee focuses on this ‘export, export, export’ business and the sabotage of import-substitution by a ruling merchant class dedicated to imperialist linkages. A story of how English colonialism was replaced by multinational colonialism led by the USA. What is the link between multinational power and separatisms?

All this comes out of ‘the long divorce of science and learning from production, the gradual squeezing out of ordinary people from any skilled participation in the production process in the name of modern production technologies’.

Commercial value cannot be separated from military & sea strategy, for the greatest interest of the sea is commerce. – US naval strategist Alfred Thayer Mahan

• Check out how Colombo Port became a crucial 19thC hub midst this ocean called Indian. Check the link between England’s major shipping/logistics giant, ports and the Bank of England (ee Focus, P&O). The goal of our glorious merchant media mafia is to retard people, with ‘free-trade’ BS. Also, check out the link between shipping and rising food prices.

Had we waited for our traders to learn to be industrialists we would have starved – Lee Kuan Yew, on how Singapore’s state sector initiated economic development.

• An interesting feature about industrial economies: they do not advertise their industrial power or the role of the state in that power. In fact, they play it down! So much so that many innocents insist Singapore is not a major industrial economy. And just like Singapore, many industrial countries, Holland, Spain etc, have smaller populations than Sri Lanka:

Singapore in 1965 established state monopolies (via statutory boards) in utilities, telecommunications, postal services, port & airport services, industrial estates, media: ‘By 1994, Singapore’s per capita GDP surpassed that of Australia, Canada, England. In 2014 Singapore placed third in the IMF’s list of countries by their per capita GDP.’ So much for the free-trade emissaries Singapore dispatches here to preach that yet-untried laissez-faire utopia.

• Here then are yet another set of ‘experts’: “A centralized education system is a hindrance to reform… The ministry cannot even control the existing 350 national schools properly.” This was at a webinar held by the notorious National Movement for Social Justice. Also, check what foreign-trained experts in agriculture have done.

In the end, the real separatists are the multinational and merchant mafia based in Colombo who wish to eviscerate the country into ‘concessions’ so they can get private contracts to sell different foreign MNC products to different regions, destroying further any unified home market for local industrialization.