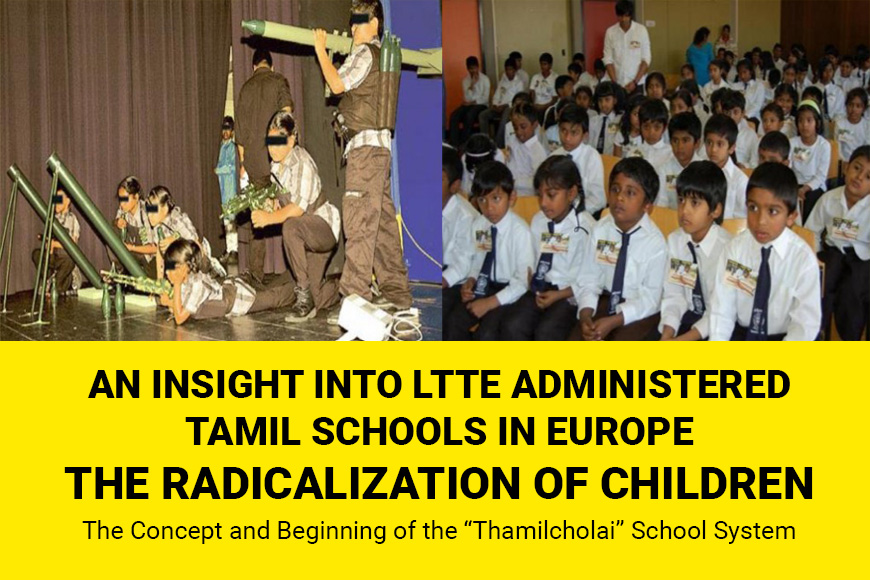 The Concept and Beginning of the “Thamilcholai” School System

Examining the beginnings of the “Thamilcholai” school system, it is clear that it was designed and created by the Liberation Tigers of Tamil Eelam (LTTE) terrorist movement, initially within Sri Lanka. The beginnings of this school system can be seen as beginning as an orphanage in and around the year 1990 in accordance with the wishes of the LTTE leader, Velupillai Prabakaran. This orphanage was established with 90 children aged between 2-12 years. In the years 1991 and 1993 the LTTE established two orphanages namely „Sencholai‟ for female orphans and „Kantharuban Aravichollai ‟ for male orphans (Kantharuban was the name of the first LTTE “sea tiger” suicide cadre who took part in a suicide operation to destroy the Sri Lanka Navy ship “Edithra”, in 1990). These orphanages were controlled and administered by the LTTE but to the outside world they were presented as orphanages run by an independent social welfare group.

The first school as such came into being as far back as 1995, long before allegations were levelled against madrasas, for similar alleged ties to terrorist organisations. The establishment of the “Thamailchollai” was ostensibly with the primary purpose of teaching Tamil language and culture to Diaspora children. This was an understandable motive, as in the alien environment of their adopted lands it is important that Tamil cultural values were kept and passed on from generation to generation. The reality is that they are very closely associated with the LTTE. In Europe alone there are more than 350 Thamilchollai schools with approximately 20,000 Tamil students between the ages 4 to 21. The LTTE front organizations are using most of these students not only to promote LTTE interest overseas but also as a source of income. The details of some of the schools that are functioning in Europe are given below PDF file.