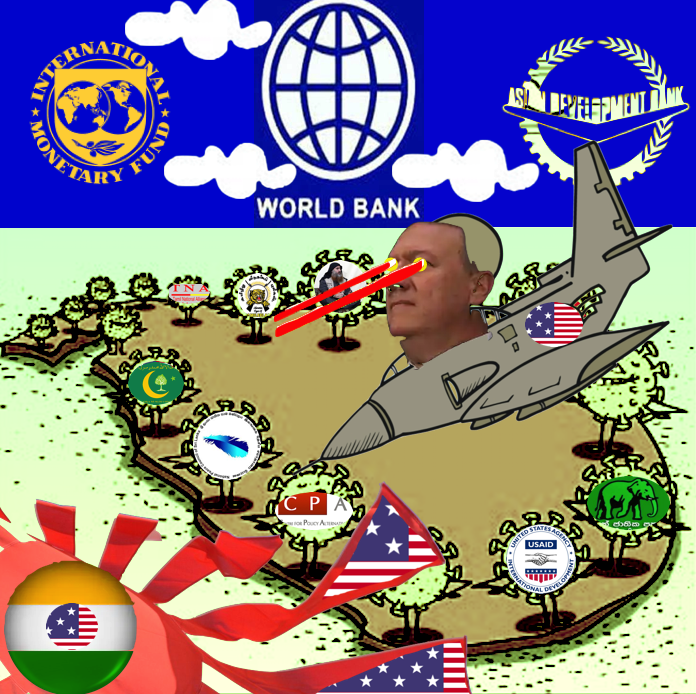 US Secretary for Foreign Wars Mike Pompeo is coming here to threaten to divide the country. The US wishes to arouse greater instability in the region to enable further intervention. An India-First Foreign Policy amounts to a US-First sell-out, since India has decided to tail the USA, argues Tamara Kunanayakam.

The US is threatening Sri Lanka to choose: between them and China? Yet they only care about their own might and profits. Look at the exponential maths of the USA’s Covid numbers: an estimated 500,000 dead by February 2021!

Don’t we need an independent foreign policy to pursue economic development? Will a ‘neutral’ foreign policy isolate Sri Lanka from its true friends across the world? This is why the media likes to talk about ‘both sides’, ‘conflict’, ‘rivalry’, etc. Such talk is false equivalency. It’s the white imperialists who keep invading our countries.

As for the UN, it is still controlled by a minority of white countries, which is why the majority in the world must unite. This week marked the 70th anniversary of the US invasion of Korea, under UN cover. Korea was divided and is still divided. Learn how the UN has been manipulated by the USA and its white allies: we strongly recommend the work of lawyer Chris Black, whose Wikipedia page was censored in 2019.

Is all this vicious media Sinophobia because the whites fear we may learn how China really developed its economy? China, after 5,000 years of feudalism and colonial humiliation, resurrected itself in 1949. They first assessed their human and natural wealth, setting up a powerful system of collecting statistics, and most importantly, ensured a plan for investment in modern industrialization. Where on earth are our private banks and companies investing their huge profits?

Meanwhile the World Bank & IMF Annual Meeting, 12-18 October, reversed decade-long harangues of ‘austerity’. They promoted austerity to slash government spending on health and education, while privatizing such social services, showering profits on financial capitalists. Now they call on capitalists to buy consent at any cost, through ‘social spending’. It isn’t clear how soon their local ventriloquist dummies (economists, think tanks, media) here will echo those sentiments, or if this end of austerity is even meant for us.

“The question now is why has the thinking changed so radically. Answers cover 3 distinct categories: bitter experience of the past decade, changed circumstances and raw politics,” concludes London’s Financial Times, under the headline “Austerity Buried!”

But, hallelujah, FT ends by speaking of possible resurrection of austerity later. This ‘resurrection’ could take place even earlier through war, for they always seek to shift their burdens on to us. We should refuse to accept the ‘honor’.

But has austerity been finally buried? People are being sacked at increasing rates? Has Capitalism decided what the world needs after a pandemic culling is another world war, with hundreds of millions murdered? Raw politics indeed!

It is no surprise then that the US War Machine has timed the visit of Pompeo for just after the 20th Amendment was passed. They demand we stay in line, and choose between them and China. Are they afraid we will learn how China developed? For the last 72 years we’ve been an unannounced de facto colony of the USA. The way the media reports Pompeo’s arrival it as if he were an avenging angel, aiming to assert this colonial subjugation, de jure.

Many forget the USA actually means United Settlers in the Americas: “The key to understanding Amerika is to see that it was a chain of European settler colonies that expanded into a settler empire.” Thus begins the powerful analysis of today’s US Empire: Settlers, the Mythology of the White Proletariat by J Sakai.

The book xrays the embryo of today’s US empire in the lives and consciousness of the early English settlers. It examines the mythology of the ‘Mayflower’ and ‘Plymouth Rock’, showing these ‘refugees” were not England’s impoverished, but mostly middle-class people trying to escape hard work by robbing other lands and enslaving other peoples. They were not escaping persecution. They had tried to persecute others by forcing their religion on them. Settlers links the present class conflicts of settler Euro-Amerikans to the struggle for the world.