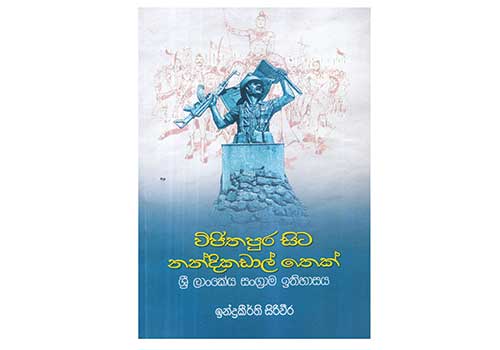 This book by one of Sri Lanka’s most eminent historians, Senior Professor Indrakeerthi Siriweera, gets into the hands of the public at a time when there is an urgent need for a clear, concise, and above all, enlightened understanding of Sri Lanka’s wars and their underlying causes. From Sri Lanka’s wars of antiquity, including the legendary Vijithapura armed conflict, to the contemporary landmark and decisive battle on the banks of the Nandikadal lagoon in northern Sri Lanka in May 2009, ‘Vijithapura Sita Nandikadal Thek Sri Lankeya Sangrama Ithihasaya’ provides us a detailed chronicling of Sri Lanka’s major armed conflicts and confrontations over the centuries and thereby proves a treasury of knowledge.

The specialist and the layman could not have hoped for a more engrossing account in lucid Sinhala of Sri Lanka’s eventful history from ancient times to the present and Siriweera’s analytical and dissecting skills in this study, along with his narrative capabilities, help to shed light on many a grey area in local history. On numerous contentious issues the record is put straight with scholarly detachment.

For example, some Sri Lankan readers in particular would like to hear what they have been given to understand are ethnic echoes from Sri Lanka’s distant past in the historic and ‘conclusive’ Nandikadal confrontation between the Sri Lankan security forces and the separatist LTTE, in ‘Vijithapura Sita Nandikadal Thek..’,but nothing could be farther from the truth. One myth that Siriweera effectively demolishes in his work is the idea that the so-called Elara-Dutugemunu duel of yore was that of an ethnic nature.

On the contrary, our historian establishes beyond all doubt that the ‘ethnic duel’ was in fact a battle for supremacy between two local monarchs who were in a bloody struggle for territory and the lion’s share of governing powers. They had among their fighting cadres people from numerous ethnicities and were not inclined to see Sri Lanka as a territory destined to be dominated by a particular ethnicity or religion. These disclosures ought to bring to the minds of impartial readers the fact that ethnicity or communalism is a creation of modern Sri Lanka’s power-hungry politicians and local history-writers with a blinkered vision. Realpolitik, rather than ethnicity, was the decisive factor in those battles of old and on this score clarity is imparted by our author.

Besides, there is the revelation that the monarchs concerned decided on the duel format to settle their differences on realizing that their prolonged confrontation in the Rajarata was proving to be exceedingly humanly costly. They intended to save as many civilian lives as possible. Thus were civilian atrocities avoided at a time when the laws of war were almost unheard of.

Considerable light is also shed on South Indian invasions of Sri Lanka in early medieval times. We are told that chief among the reasons for these invasions was the robbing of the wealth of the island and the ambition of Chola kings, for example, to boost their popularity at home. Moreover, local kings, on and off, sought the help of South Indian monarchs and ruling strongmen in their power struggles against each other.

That is, these relations between sections of the South Indian royalty and their local counterparts were, very often, of an opportunistic kind. These disclosures open to question the widespread belief, locally, that South Indian invasions of Sri Lanka bore the hallmarks of typical imperialistic conquests aimed at absolute political and economic subjugation. However, there were spells in local history when South Indian emperors ruled some regions of the island as part of their overseas territorial possessions. One such period was from AD 1017 to AD 1070, when the Rajarata in its entirety was ruled by a Chola emperor. The latter called the Rajarata ‘Jananathapuram’.

A chief merit of ‘Vijithapura Sita Nandikadal Thek..’ is its gripping narrative style. There’s never a dull moment for the reader. Wars in Sri Lanka from time immemorial as it were are related graphically with a keen eye on detail. At the end of the reading, the reader could consider herself to be endowed with a substantial knowledge of Sri Lanka’s political conflicts and wars from ancient times to the present.

All major epochs of Sri Lankan history are covered in their essentials with major developments of pre and post colonial times being made to come alive, with special reference to people and personalities, both great and small, who were at the heart of the historical process. Of special interest are the kings and queens of Sri Lanka and the prime personages among Sri Lanka’s foreign invaders, Western and non-Western.

Final chapters and sections in ‘Vijithapura Sita Nandikadal Thek..’ that greatly enhance its value pertain to commentaries on theories and concepts of war along with comprehensive lists of the names of local kings and queens, including those of northern Sri Lanka, provided in chronological order with relevant information. Of equal significance are lists of names of Portuguese military leaders who featured in wars in Sri Lanka together with similar listings of the names of Dutch and British Governors who were at the centre of Sri Lanka’s eventful and often bloody evolution. All such features render this book ‘a must read’.