An attempt to rediscover historical demarcation of provincial boundaries

Prof. G.H. Peiris challenges  through an academic perspective the concept of the ‘Traditional Tamil Homeland’ In ancient history,

Sri Lanka remained divided into three parts – Ruhunu, Maya and Pihiti – to suit the administrative convenience of that time of kings

Also, there are different shades of opinions prevailing in the government on the Provincial Councils

Besides, another segment of the government is in the process of building up public opinion against the Provincial Councils

Prime Minister Mahinda Rajapaksa is reported to have suggested the creation of an administrative structure remodeled on the ancient demarcations of Sri Lanka into regions as ‘Ruhunu, Maya and Pihiti’ to govern the country in place of Provincial Councils.

This is just a suggestion by the Prime Minister, but no serious consideration has been drawn to it so far.  Nevertheless, it cannot be disregarded because the Prime Minister mooted such a concept at a time the new Government has already initiated the process of making a new Constitution to be enacted by repealing the present one. A committee has been appointed to draft a completely new Constitution as the next step of the Government’s constitution making exercise after the enactment of the 20th Amendment.  That the Prime Minister, or the government for that matter, is serious minded in rediscovering historical roots in the task at hand, can be gauged from the inclusion of renowned academic Prof. G.H. Peiris (Gerald Peiris) in this experts’ committee assigned for the purpose.

Prof. Peiris has a reservoir of knowledge regarding the historical demarcation of boundaries. He has written reams and reams delving into the subjects of ancient demographic and geographic patterns, land policy and the ethnic conflict in Sri Lanka.

In his book titled ‘Land Policy for Sustainable Development’ (2017), he challenges  through an academic perspective the concept of the ‘Traditional Tamil Homeland’ and makes references to the demarcation of the Northern and Eastern provinces by the British to suit colonial administrative conveniences.

In his book he writes: “There is no doubt that, following the collapse of the Rajarata civilisation in which the Tamils constituted a vital element, there was a long drawn out process of “Tamilisation” ―both demographic and cultural― in the north and in certain localities of the eastern littoral.  However, the population pattern which prevailed at the culmination of this process in the early decades of the 20th century, considered against the backdrop of earlier trends, drives us to the conclusion that this process was scarcely felt in the interior of the eastern parts of the island which, indeed, remained throughout a ‘traditional homeland’ of the Sinhalese peasantry.  Accordingly, there is no basis whatever for the assertion that the aforesaid “Tamilised” areas correspond to the Northern and Eastern provinces as these were demarcated by the British, somewhat arbitrarily, to suit their administrative conveniences in the 19th century, and as they remain demarcated at present”. 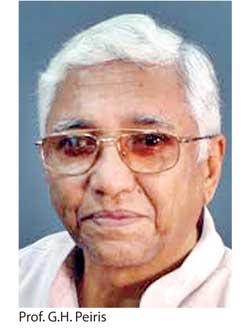 An academic with such a background has been included in this committee undoubtedly to guide the other legal luminaries serving in it on the historical, geographical aspects and contours in evolving the new governing structures under the proposed new Constitution.

In ancient history, Sri Lanka remained divided into three parts – Ruhunu, Maya and Pihiti – to suit the administrative convenience of that time of kings.

However, in contrast, the present provinces were created by the British after 1815 based on recommendations by the Colebrooke Cameron Commission. Initially, five provinces were created in 1833 – Central, Northern, Eastern, Western and Southern provinces.  The other four provinces were introduced later. Of them, the North-western province was created in 1845, North-central province in 1873, Uva province in 1886 and Sabaragamuwa province in 1889.   Though the provinces remained in the country, the elected councils to govern the territories coming under each province were set up in consequent to the Indo-Lanka accord signed in 1987.  The Indo-Lanka Accord also paved the way for the merger of the Northern and Eastern Provincial Councils to constitute the North-East Provincial Council, a move reversed by a Supreme Court  ruling in 2006.

The experts’ committee which is working on the new Constitution will revisit all these factors in coming out with alternate proposals.  Here, Prof. Peiris will advise the committee in this respect.  That seems to be the very purpose for his inclusion.

But the total abrogation of the system looks an arduous challenge because it is part of Sri Lanka’s commitment to India in terms of the Indo-Lanka Accord. It was signed on July 29, 1987 between then President the late J.R. Jayewardene and former Indian Prime Minister the late Rajiv Gandhi.

The Accord also says the Northern and Eastern provinces are the areas of historical habitation of Tamil people. Paragraph 1.4 of the accord says , “Also recognising that the Northern and the Eastern Provinces have been areas of historical habitation of Sri Lankan Tamil speaking peoples, who have at all times hitherto lived together in this territory with other ethnic groups:

Any amendment or alternation of the present system may have to be reconciled with India as otherwise it will be opposed to it. The government has decided to appoint former Minister Milinda Moragoda as Sri Lanka’s envoy to New Delhi, subject to clearance by the High Post Committee of Parliament. Mr. Moragoda is someone opposed to the Provincial Council system according to his recent writing. Also, he is a person with direct links to the Indian leadership. The government is going to appoint him as the High Commissioner of Cabinet rank to India. It is thinkable that such an appointment is considered to address some contentious issues that might crop up in the future.