Alaina B. Teplitz: A Karen for an Ocean called Indian 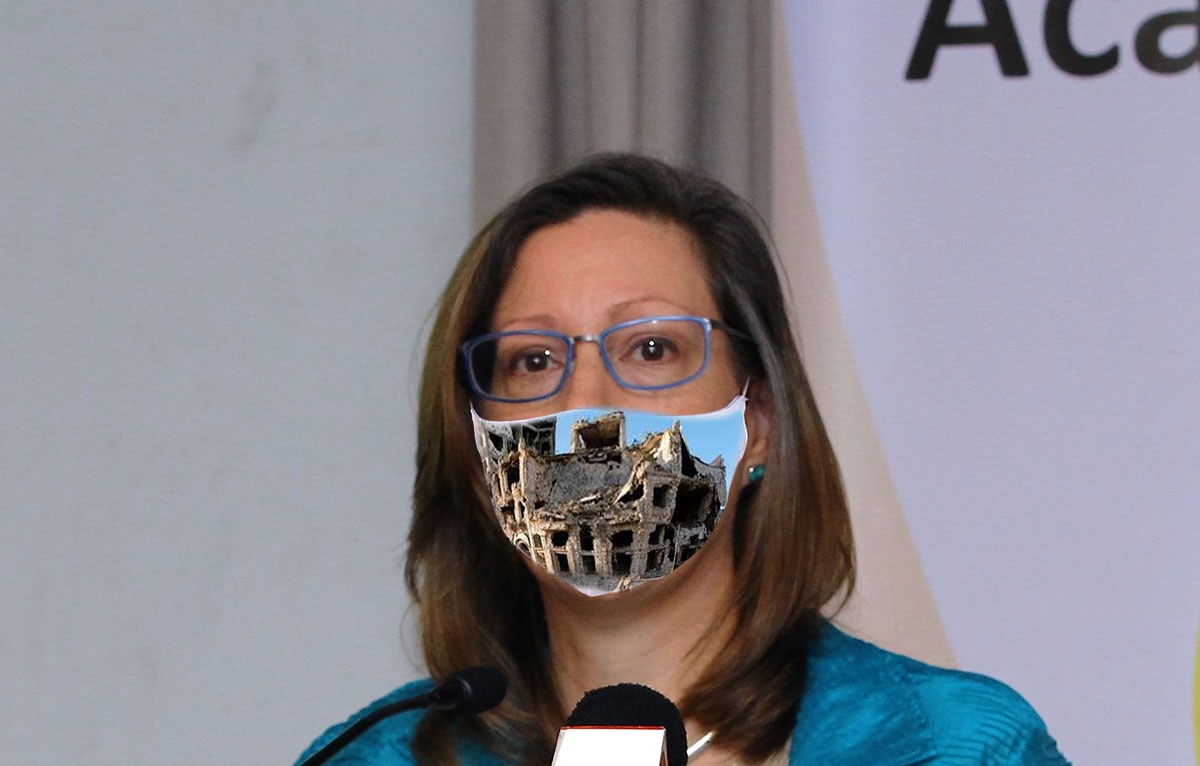 “Karen” is the sarcastic name given to any white woman in white countries who starts crying for no reason when she sees a Black man, and calls the police, who then arrest or kill him.

Stein, a Nazi-loving Jew, is also famous for the line, “There is no there, there,” about her hometown in California. So it is Stein rather than Alice B., who makes me recall Alaina B. For when one listens to the ambassador’s drivel on Sri Lanka and China, we do not need a Chinese-invented compass, to realize, “There is no there, there”. We just magnetically wonder on which planet she has lived and lives.

Teplitz wishes us to be wary about China. A China where England and the US waged war to push opium (with the US Marines first set up to protect opium stolen from Turkey, enriching Boston’s Brahmin Bankers, and such families of US Presidents from Coolidge to Roosevelt, etc.). A China where the US demanded “extraterritoriality” on Chinese land, so white murderers of Chinese people could escape justice. This is the China where the US demanded “Equal Opportunity” with Europeans, meaning the right to rob that country. This is China where in 1949 the US army protected the defeated KMT forces while they looted Beijing’s Forbidden Palace of 5,000 years of accumulated treasure and fled to occupied Taiwan.
“Blaming the victim” is said to have been coined to explain white US politicians’ methods of blaming Black people for what white slavers have done. This logic has been called “one of the most sinister features of the Fascist character.”

The US needs no lesson on fascism. The Nazis saw white settlers as their role models. Teplitz carries on this great US tradition of blaming the victim when she, aided by a corporate media monopoly, both domesticated and foreign, from New York Times to Fox, accuses China of creating ‘third world debt’ and military invasion. Here is boggling mindlessness about how the US-controlled World Bank and IMF set up “Structural Adjustment”. And here is a USA with 1,000 lethal bases worldwide, refusing to leave occupied Diego Garcia, accusing China of setting up bases, and protecting its border in the South China Sea, which the US would like to rename an outer-California pond.

Teplitiz says: “The United States will continue to support democracies globally as they fulfil the economic and social needs of their citizens in a way that respects the values enshrined in the UN declarations.”
Really? Who does Alain B. think, we, in this land of long-memoried elephants, are?

Now if Teplitz will not believe the world history we relate, we would recommend the US’s own much-publicized liberal phalanx, like Noam Chomsky, who penned The Washington Connection and Third World Fascism, a book, rarely mentioned, which yet lists in detail not just the dictators the US has promoted but also the torture programs they financed and ran around the world.

This book was considered so dangerous that the US State Department had Warner Modular Publications (yes, owned by Warner Communications) buy the French publisher after 20,000 copies of the book were printed, and then have them all shredded! No major publisher would touch it. Such is the US commitment to uphold freedom of speech.

For those who wish to learn real US history, the most ‘woke’ book ever written on the USA is White Settlers by J. Sakai. Here is a no-holds-barred expose of the truly real, from the genocide against the real Americans, to the imposition of chattel slavery, to the overthrow of southern post-slavery Reconstruction governments when Black elected officials, with ruling majorities, were jailed, beaten or shot, from the invasion of the rest of the Americas, and then to the world.

So what does Teplitz mean by “continue to support democracies”. Does this not include the fully-US-armed settler state of Zionist-occupied Palestine (aka Israel) which cages the Falastin, cos they dare not even dream of “one man one vote”, and the hydrocarbonate satrapy of Saudi Arabia. Does it include bombed out Yemen, Mali and all the US AfriCom bases in Africa, imposed under Obama who first nominated Teplitz. Yes, Obama, who is considered the whitest US president yet, for under him atrocities like the rape and murder of Libya’s Muammar Ghaddafi took place, which could never have happened under anyone less shadier.

There is also that long lineage from the invasion of Philippines, Guam, Cuba & Puerto Rico in 1899. There too the US invasion began with the US blowing up its own ship USS Maine in Havana Harbor, with the US President McKinley claiming god told him to redraw the map of the world.
Then there is every US-sponsored dictator in the Americas, from Batista to Trujillo to Pinochet, to Honduras’ recent Hernandez, couped into power by Teplitz’s beloved Hillarious Clinton, and then there were those in Africa like Botha and De Klerk, Mobutu Sese Seko, who Mother Teresa loved so much too, to Chiang Kai-shek, Diem, Suharto,  etc….

Now Alaina B. is no wilting violet. She comes to us bloodstained, after doing her time warmongering with NATO, overseeing the mass murder of Afghanis, and of course in the Kingdom of Belgium, where the capital of the democracy-lecturing EU resides. Yes, a monarchic Kingdom, which recalls not just their genocidal Leopold but also his English cousin, the equally-genocidal Victoria, whose real secret is the holocausts during her reign that almost wiped out the original peoples of the Americas and the Pacific. Victoria marks when the great divergence took place between Europe and the rest of the world, as Asia plunged into serial man-and-woman-made famines. Ms. Teplitz, we know all this.

And yet this white woman, who would probably clutch her handbag and jump across the street if she sees a Black man attempt to walk by her in the USA, feels she can lecture us on who our friends should and should not be.
Teplitz wishes us to be thankful for the US aid after the tsunami. But all we recall is the US government using the inundation to land 100 Marines and Navy troops from the USS Duluth invading Koggala (which we were told this week, was going to site a base to refurbish US Bell Helicopters).
But then, the mountain labors and gives forth a hikmeeya! Ambassador Teplitz reminds us that the USA has given biscuits to Sri Lankan students. She does not ask why we needed biscuits all the way from Battle Creek, Michigan. She does not ask whether it was to undermine our own biscuit makers, or why the US has been so dedicated to making us switch from rice to wheat flour. American Pity, indeed! Ah! how the kkkookkkie kkkrumbles!
Teplitz resembles a KKKaren, that popular epithet for an overly entitled white woman. She is, however, more hunchbacked Mother Superior, carrying the white woman’s burden, hobbling far from her parish, towards what she claims is a wayward neighborhood dark child in our hood, who lacks proper white patriarchs, being led away by an evil witch, painted in the lurid combination of those long-abused tropes of Red Menace and Yellow Peril, which the century will soon discard.