After Geneva Resolution: What next? 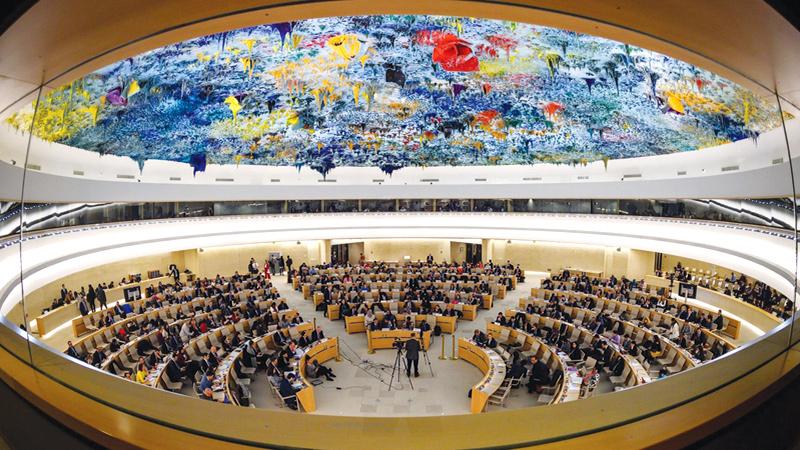 The adoption of the UNHRC Resolution against Sri Lanka is a setback not only to the government but also to the country and the people. It, is however, not the end of the world. The Government as the elected authority by the people should now seriously think about the effectiveness of their foreign policies, foreign relations and perhaps personnel who are handling these crucial matters.

Defeating the Resolution undoubtedly was a difficult task, among other factors, given the last Government was completely following an opposite policy. Who was correct may be a debatable matter for some, but not for the majority. If Sri Lanka had a better profile among the OIC countries and a counter strategy for ‘reconciliation and accountability’ along with preventing terrorism, defeating the resolution could have been feasible.

The recent statement by Mangala Samaraweera that Resolution 30/1 in 2015 was not only something co-sponsored by his Government but in fact drafted by Ranil Wickremesinghe and a group is quite a revelation. Why did Samaraweera wait for such a long time to reveal the truth is the question?

Whatever the different nuances or tactics between Governments, foreign policy should be a common endeavor that all Governments should adhere to. National interest is the primary concern of any foreign policy, political, economic, or other. The ball is now with the present Government to build that consensus with the main opposition, as Wickremesinghe and his UNP are now categorically defeated.

During the campaign for the Resolution against Sri Lanka the last Government’s position was a major trump card in the hands of the UK and the US to win over around 14 countries other than their own Western countries. It was primarily a campaign against the present Government on political and on other grounds.

As a report by the Universal Rights Group stated,[1] “Two country situations in particular dominated the Council’s attention during its 46th session: Myanmar following February’s coup, and Sri Lanka following the return to power of the Rajapaksa family. At the end of the session Resolutions on both situations (the former led by the EU and the latter by the UK) were adopted, by vote in the case of Sri Lanka (22-11-14) – the first time a vote has been called since 2014, and by consensus in the case of Myanmar (though many LMG States disassociated from the text).” (My emphasis).

The report was equating the election of Rajapaksa leadership to coup d’etat in Myanmar. It is very clear that motive behind the Resolution was political, against an elected government whatever its main composition. This was also very clear from the High Commissioner’s report on Sri Lanka that paved the way for the Resolution. They were angry with the Government as it was not subservient to the international forces.

One may agree or disagree with the Government, but it was overwhelmingly elected by the people. It is still not known how far Ranil Wickramesinghe and his followers campaigned for the Resolution. We may have to wait for Mangala to reveal it later. The politics of these people apparently are so treacherous to the country.

Legality of the Resolution

There are people who wonder whether the recent UNHRC resolution is legally binding on the country or not. On this count, some have been even criticising some Ministers on their statements. I have looked for authoritative statement from the OHCHR itself, but unfortunately clear procedures are not explained in their website for some (dubious) reason. The best I could quote is from ‘The Human Rights Council: A Practical Guide’ from the Swiss Mission in Geneva as follows under ‘HRC Resolutions.’[2]

‘HRC Resolutions are the political expression of the views of its members, or a majority of its members, on specific human rights issues and problems that are of particular concern to the international community. They are sometimes also used to recognise the existence of certain ‘soft law’ principles (cf. e.g. Declaration on Human Rights Education and Training, annexed to res. A/HRC/RES/16/1). Regardless of their content, HRC resolutions are not legally binding.’

The emphasis in bold in the above paragraph is not mine. They were there in the Guide. According to this authoritative guide, (1) HRC resolutions are political expressions of member countries, of course on human rights issues, thematically or on country situations. Therefore, it is a political task for countries through diplomatic means to canvass and bring support for their positions. (2) Except in the case when the HRC approves UN General Assembly’s ‘soft laws,’ the HRC Resolutions are not legally binding on member states or the target countries. However, the High Commissioner and the office are legally binding in implementing them.

In May 2009, Sri Lanka successfully managed to obtain 29 out of 47 votes for its own Resolution at the UNHRC when a UK lead group was planning to bring a resolution against the country. That was the success of diplomacy of the country that time. Of course, when such a Resolution is proposed, the incumbent country has a duty to implement it. It is something that you do positively, and not negatively. Not as a tactic but as a commitment.

After that Resolution, there were no Resolutions on Sri Lanka until 2012. Thereafter it was a period of tumble down for the country particularly in diplomatic terms ending in Ranil and the group proposing something completely disastrous to the country. Under the circumstances, Sri Lanka’s defeat at the last occasion is not a surprise. Most of the independent countries were puzzled because of the zigzags of different governments.

It is doubtful whether the Ranil Resolution in 2015 was proposed with a genuine effort for reconciliation or accountability. It must have done as a tactic. This is also clear from Mangala Samaraweera’s statement. The purpose appeared to be to satisfy the Western countries (the US and UK) and not necessarily the Tamil community or the victims although the TNA also supported that effort.

Although Sri Lanka is not legally binding on the HRC Resolution, there are political imperatives and customary practices that the country may have to follow. As the first struggle is over (with a setback of course), the country may have to use different tactics. More than being tactical, Sri Lanka can be straight forward and true to its beliefs. It should restart good relations with all countries irrespective of how they voted or behaved at the HRC, including the UK, USA, and the EU.

Although Sri Lanka is not legally binding on the HRC resolution, the High Commissioner and her office are legally binding. Therefore, they may have to soon start fact finding and even visits to Sri Lanka. A budget of $ 2.8 million is indicated for this task. Although I said in my last article that Sri Lanka should not allow anyone from the office to visit Sri Lanka that could be handled tactfully and cautiously.

The most important is to be true to Sri Lanka’s beliefs and interests. This is political realism. Although some foreign countries and Tamil Diaspora believe that accountability is the priority matter, Sri Lanka believes reconciliation is the most important. Some are even asking for the ‘pound of flesh.’ This is all after supporting LTTE terrorism unashamedly.

On the question of accountability, there is another difference. Sri Lanka has shown that the country is ready to ‘forgive and forget’ most of the past atrocities of the LTTE for the sake of the future of all communities if the perpetrators genuinely repent. This may even apply to Adele Balasingham. At the same time, it is not ready to punish the military leaders who must have made mistakes in their judgements or directives. This has nothing to do with any actual or factual crimes committed by anyone in the field. The Government should be ready or cannot prevent even today anyone filing such cases in the Supreme Court or before in the High Courts. Instead, going behind foreign jurisdictions cannot be acceptable for the great majority of the people.

Even at this stage of great controversy, there is a possibility of the Government, preferably with the agreement of the opposition, making a statement to all member countries of the UN on something like ‘Prevention of Terrorism and Promotion of Reconciliation, Accountability and Human Rights.’ It should be made clear to the international community that without measures for the prevention of terrorism through national security, sustainable reconciliation and accountability cannot be achieved.

It should also be made clear that in Sri Lanka’s view human rights should go along with promoting human duties and responsibilities.