A recipe for sustainable farming 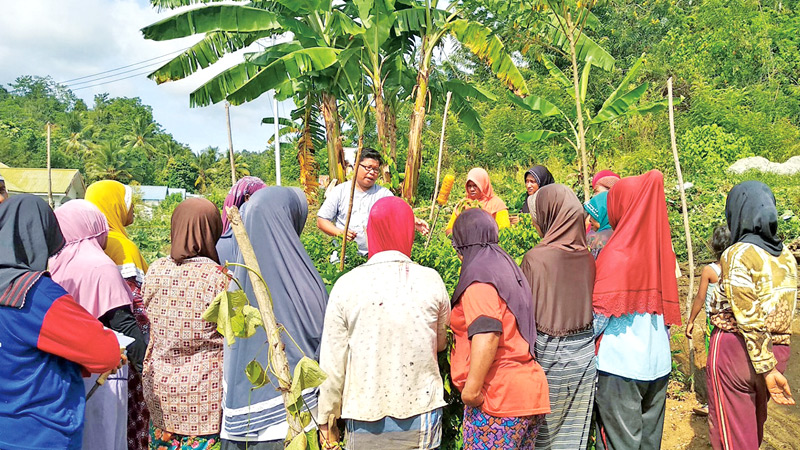 The island of Sulawesi, part of Indonesia, is home to a wealth of species found nowhere else. Among the branches of trees, otherworldly-looking primates – the Tarsiers – leap upon unsuspecting insects. Above them hornbills feast on fruit, then fly away to spread the seeds across the island. While Sulawesi’s species’ richness is enormous, this island is also facing a serious challenge – one of which is unsustainable agriculture.

Research has shown that using non-organic fertilizers has contributed to the decreasing quality of soil and water on the island, thus affecting its biodiversity. This is not just a problem for nature. As the UN Food and Agriculture Organization confirms, biodiversity contributes to people’s livelihoods and provides multiple ecosystem services such as clean air and water, carbon storage, climate regulation and reduced risk of soil erosion.

To address this, Burung Indonesia (BirdLife Partner) is supporting local farmers in developing sustainable agriculture practices. With support from the Critical Ecosystem Partnership Fund – Burung Indonesia’s partner in Central Sulawesi – along with local NGOs Yayasan Panorama Alam Lestari (YPAL) and Perkumpulan Salanggar, they have developed organic fertilizers using ingredients that can be easily found in every household.

In Mayakeli dan Wera Village in central Sulawesi, YPAL helped the community to develop organic farming practices which increased the productivity of their rice fields, as well as repelling pests. For the pest repellent, they created an eco-friendly formula using garlic, turmeric, lemongrass, pepper and various leaves, mixed with PH-neutral liquid soap. For fertilizer, they mixed banana stems, Gamal plant, manure, cassava and sugar to produce liquid organic fertilizer to increase the nitrate, phosphate and calcium concentration of the soil. The use of organic pesticide is only recommended if the damage to the plant reaches 80 percent, while the fertilizer can be applied once a week to the rice fields and vegetable farms.

The use of this organic fertilizer has significantly increased the production of rice and vegetables, with the results typically beginning to show in the third harvesting period. During first two harvests, the farmers still produced 680 kilograms of rice. But by the third, they were harvesting 800 kilograms, and consequently earning more money.

Elsewhere, Perkumpulan Salanggar helped to develop a different method to control pests on dry fields. People who lived in Balayon and Bojoumete villages on the Banggai islands installed traps made from plastic water bottles. These were painted with bright colours to attract the insects, which then became immobilized by the glue on top. Alongside their crops, the farmers grow plants with strong odours, such as lemongrass and zinnia, to attract predatory insects that eat pest caterpillars and aphids. These methods have successfully increased the productivity of the farm and the quality of the produce, allowing farmers to earn 300,000 to 500,000 Rupiah per yard from growing vegetables. As such, organic agriculture is helping to increase food security and nutrition on top of the financial benefits.

While these farmers concentrated on organic fertilizers and pesticides, another farmer in Gorontalo – a BirdLife Nature’s Heroes awardee – successfully developed agroforestry on his land. As a recent migrant, Sartam set about cultivating sloping land near forest where Heck’s Macaque – a primate unique to Sulawesi – lives. He applied terracing on the sloped land, and introduced an intercropping method to optimise the productivity of his cacao plantation: while waiting for cacao to be harvested, he planted palm tree, ginger, and turmeric among the trees.

As part of his sustainable agroforestry practices, since 2017, Sartam has been using organic fertilizer consisting of manure fermented with straw and corn stalks. The productivity of his farm has increased as a result: three years ago, his two-hectare cacao plantation only produced 680 kilograms. Based on Burung Indonesia’s records, in 2020 Sartam harvested 1.5 tons of cacao, increasing his earnings accordingly.

By developing sustainable agriculture practices, ranging from eco-friendly fertilizers and pesticides to intercropping, the community has seen first-hand that they play a vital role in protecting their environment, while maintaining sustainable livelihoods. (BirdLife International)