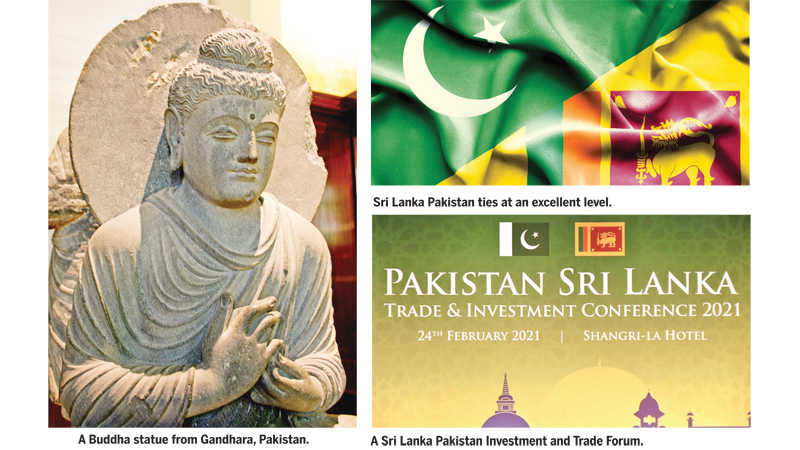 Despite being criticized for some of its narratives, the second season of Indian espionage thriller “The Family Man” has been garnering massive viewership all over South Asia, across various religions and nationalities, over the past two months. Where the first season revolved around Kashmiri militancy, the second has Sri Lanka’s Tamil insurgency at its centre, plotting attacks in India.

The common enemy in both seasons? Pakistan, of course.

Pakistan’s fanning of Kashmiri separatism, or India’s involvement in Balochistan – two of the many subplots of the TV show that are “inspired by news stories” – are more reported narratives; the Inter-Services Intelligence (ISI) collaborating with the Liberation Tigers of Tamil Eelam (LTTE) to target southern India might have taken more creative liberty.

In an interesting real-world twist, after being delayed for months, the release of “The Family Man” Season 2 has overlapped with attempts in Pakistan to bring its relations with Sri Lanka out of India’s shadow, especially in light of Islamabad’s touted diplomatic shift from “geopolitics to geoeconomics.”

On July 20, Pakistan’s High Commissioner to Sri Lanka Major General (Retired) Muhammad Saad Khattak addressed a press conference in Colombo. Khattak emphasized the economic collaboration between the two countries as he announced the visit of a high level delegation from the Rawalpindi Chamber of Commerce and Industry. Pakistan’s Foreign Ministry maintains that Prime Minister Imran Khan’s visit to Sri Lanka in February has laid the foundation for mutually beneficial bilateral ties.

His visit was preceded by the 12th session of Pakistan-Sri Lanka Joint Economic Commission, which saw the Joint Working Group on Trade, Investment, and Auto Sector revived after seven years. The Pakistan-Sri Lanka Trade and Investment Conference 2021, followed by the Business-to-Business (B2B) Networking Session, were both held during the premier’s trip. The meetings were designed to open new outlets for economic cooperation, while building on the existing arrangements.

The Pakistan-Sri Lanka Free Trade Agreement came into effect in 2005. Pakistan offered Sri Lanka soft-term credit facility for sugar and cement plants in 2011. A US$ 200 million Export Credit Facility via the State Bank of Pakistan was also offered to Sri Lanka in 2012. Even so, despite the much touted foray into geoeconomics, it is geopolitics that has long dictated Pakistan’s relations with Sri Lanka.

India, which already enjoys immense economic and political sway in Sri Lanka, has remained a decisive factor in the island country’s relations with New Delhi’s hostile neighbour. Amid India’s much publicized role in the civil war fluctuating between supporting insurgents — especially on the part of the Tamil Nadu government — and bolstering Sri Lanka’s military between the 1980s and 2000s, the Pakistan army managed to form a more straightforward relationship with its Sri Lankan counterpart, helping its crackdown on the LTTE. During Khan’s visit, Sri Lanka was also offered a US$ 50 million defense credit line, with the two countries completing a joint military drill “Shake Hands 1” in April, further bolstering security relations between the two armies.

Sri Lanka has a long history of attempting to balance its ties with the two nuclear-armed neighbours, even in the most ominous conflicts, as exemplified by the country offering Pakistan refueling facilities during the 1971 India-Pakistan war. However, Indian influence has often been decisive over the years, and has impacted a wide range of diplomatic realms. This has included cricket, a sport South Asia is passionate about, one that has often served as a diplomatic conduit.

As civil war ravaged in Sri Lanka, many international cricket teams refused to tour the country. India and Pakistan were the only sides willing to do so, even sending a combined Indo-Pak team before the 1996 World Cup to deliver a unified message on the Sri Lankan security situation. With bilateral politics continuing to mar the cricketing relations between the two nuclear-armed states, the 2009 terror attack on the Sri Lankan cricket team during a visit to Lahore led to Pakistan’s isolation.

“I made it a point to tilt toward the Sri Lankan point of view in ICC Board meetings because I felt we needed an ally against India’s dominating tactics,” political analyst and journalist Najam Sethi, who served as the Pakistan Cricket Board chairman in 2017-2018, told The Diplomat.

Following the 2009 attack, international teams had refused to visit Pakistan, with Zimbabwe’s tour in 2015 the only exception. Sethi, however, in 2017, convinced Sri Lanka to tour the country, which eventually paved the way for the resumption of sporting activities in Pakistan.

“I [had] argued forcefully to shift the venue of the next Asia Cup from India to a ‘neutral’ country like Sri Lanka. [Then] I made a passionate plea for Sri Lanka to return to Pakistan and help end its isolation in international cricket,” Sethi recalled.

“I reminded the Sri Lankans that during their long civil war when bombs were going off everywhere Pakistani cricket teams continued to tour the Island despite serious security concerns. This was in addition to the state-to-state support in beefing up Sri Lanka’s defense forces when there was covert support to the Tamil rebels from neighbouring India.”

The 2016 SAARC summit underlined how Sri Lanka can become caught in the middle of an India-Pakistan tug-of-war. After India walked out of the meet scheduled to be hosted in Islamabad – accusing Pakistan of backing cross-border terrorism in light of the Uri attack – it was soon followed by Bangladesh, Afghanistan, and Bhutan. Sri Lanka’s decision to also pull out eventually cancelled the summit. India interpreted the move as Sri Lanka echoing its terror accusations against Pakistan, while the latter blamed New Delhi and later even issued a statement quoting Sri Lanka’s support for Pakistan to host the meeting in 2017.

Similarly, this year, when Imran Khan’s originally planned speech to the Sri Lankan Parliament was cancelled at the 11th hour, fingers instinctively pointed towards India. Reports claimed there were concerns that Khan might bring up his anti-India rhetoric in Parliament, including Indian actions in Kashmir.

“The proposal to have the Prime Minister address the Sri Lankan Parliament came from the Sri Lankan government and later on they decided to cancel it due to COVID-19 situation,” Pakistan’s High Commissioner to Sri Lanka Saad Khattak said during an interview with The Diplomat.

“India is Sri Lanka’s big neighbour and both countries have historical linkages. It is in that light that we see the relationship between the two countries. Bilateral relations should be based on goodwill, respect for each other’s integrity and sovereignty as well as non-interference in each other’s internal matters,” he added.

While COVID-19 was the official reason cited by the Sri Lankan Government as well, another possible rationale for cancelling Khan’s speech was potential criticism of Sri Lanka’s forced cremation of Muslims dying of the coronavirus. Immediately after Khan’s visit, Sri Lanka did away with the controversial cremations.

“Sri Lanka made the move to cater to the wider Muslim world and the Organisation of Islamic Cooperation, which it feels Pakistan is an important member of,” Jaffna-based lawyer, activist, and analyst S.C.C. Elankovan told The Diplomat.

An understanding on Pakistan’s part was also reflected in Imran Khan not directing public criticism toward Sri Lankan policies perceived to be anti-Muslim, even as he has vocally lambasted “Islamophobia” in India and even across the West.

Another positive turn on the humanitarian front has also been witnessed by Sri Lanka halting the expulsion of religiously persecuted refugees from Pakistan. Most of them belong to the Ahmadiyya, Shia, and Christian communities, which face widespread marginalization in Pakistan. Sri Lanka, long a safe haven for asylum seekers, started deporting the refugees in 2014 as it revoked the “visa on arrival” facility for travellers from Pakistan.

“When the local Christian clergy questioned the move, the then Mahinda Rajapaksa Government told them that New Delhi had pushed for the deportations, because India claimed that jihadists from Pakistan were arriving in the cover of refugees to Sri Lanka and then launching attacks in India,” said Elankovan.

With both Pakistan and India held hostage to their respective religionist narratives peddled by hardline governments, many Sri Lankans say that a multicultural and pluralistic approach is needed to build bridges in the region.

Colombo-based author and speaker Dr. Dheena Sadik, who has lived in Pakistan first as an MBBS student and then as a medical practitioner, says people-to-people contact is the best way to build relationships, but adds that she blended easily in Pakistan because she’s a Muslim.

“From 18 to [my] mid-20s, I spent my life in Pakistan, and when I returned, culturally I was no more just a Sri Lankan, I had become a hybrid version of Sri Lankan and Pakistani. Being a Muslim I found instant common ground, instant connection, but I can’t speak on behalf of non-Muslim Sri Lankans,” Sadik told The Diplomat.

“In people-to-people contact, something I noticed about Pakistanis is that with foreigners they tend to check if they are Muslim. That needs to change. When it comes to intercultural [and] international relationships, friendships, we have to go by what we have in common. Leading with religion can instantly create barriers instead of creating bridges,” she added.

Sadik is one of thousands of Sri Lankan students to have studied in Pakistan. Over the past two years, a further thousands of opportunities have been created via Pakistan-Sri Lanka Higher Education Cooperation Programme, with Islamabad giving away “Allama Iqbal” and “Jinnah” scholarships.

Furthermore, making the most of the rich heritage within its borders, Pakistan is also creating a “Holy Buddhist Trail,” building state-of-the-art logistical facilities to benefit pilgrims and tourists alike. In April, 14 Buddhist monks from Sri Lanka undertook a week-long pilgrimage from Lahore Museum to the Swat Valley.

“Pakistan is a Buddhist tourism and cultural hotspot, which unfortunately could not be fully explored due to the adverse security situation in our two countries in the past few decades,” said Saad Khattak. “Now that both countries have finally overcome the internal unrest, all Buddhist tourist and culture spots are open and safe for foreign tourists.” The High Commission has also produced a documentary on the Gandhara Civilization and Buddhist heritage of Pakistan, which will soon be released in Sri Lanka.

As Pakistan’s peddling of its religious pluralism is helping it fortify independent relations with Sri Lanka, it is evident that the same line of diplomacy would aid Islamabad in reconstructing bridges in a largely tumultuous neighbourhood.

Even so, with Pakistan still fixating on its Talibanized vision for Afghanistan while embracing Chinese hegemony, it might still have to pursue duplicitous diplomacy. That would mean cheerleading for Beijing in the China-India-Sri Lanka triangle as China looks for economic expansionism in Sri Lanka, just as it has in Pakistan, via its Belt and Road Initiative (BRI).

Incidentally, the officially announced Season 3 of “The Family Man” is all set to narrate the story of a Chinese threat hovering over India.

(Kunwar Khuldune Shahid is a Pakistan-based correspondent for The Diplomat).
– The Diplomat
Source: dailynews.lk