A moral victory for peace and liberty 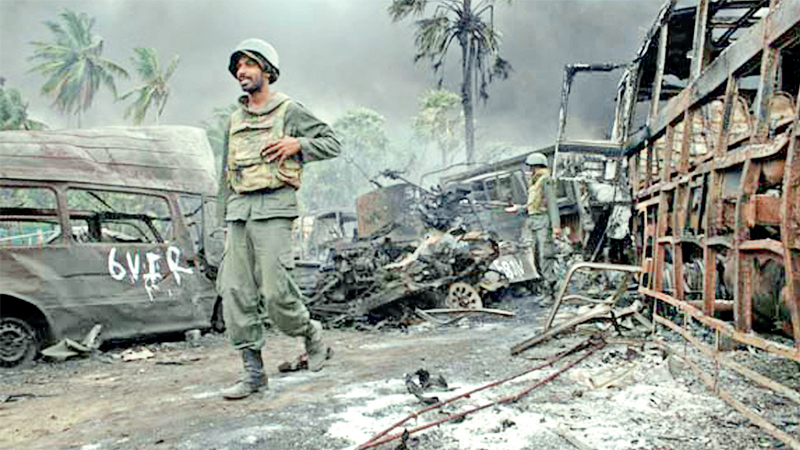 Twelve years ago to this day, Sri Lanka vanquished the Liberation Tigers of Tamil Eelam (LTTE) which the Federal Bureau of Investigations (FBI) of the USA listed as the world’s most dangerous and ruthless terror group, even ahead of al Qaeda. Today, the main architects of both terror groups – Velupillai Prabhakaran and Osama bin Laden – are no more. With two of the biggest terror leaders gone, the world should be a much better place to live in.

This is indeed a good sign that terrorists and terrorism cannot forever undermine the liberty of the people. In fact, Sri Lanka is often described as the first country in contemporary history to wipe out terrorism. This should be an inspiration to all other countries and regions fighting terror on their soil.

The LTTE, al Qaeda and the newer offshoot ISIS are global entities. After all, terrorism anywhere is terrorism everywhere. Terror groups raise funds in one country to finance and conduct an operation in another. They brainwash even young children to take up arms and worse, even to blow themselves up. They glorify their cause and their leaders and kill civilians in the name of liberation. Individual countries, not even the Superpowers, cannot fight terrorism alone. Global cooperation is vital to suppress terrorism.

Sri Lanka was never alone in fighting the terrorist scourge. A large number of countries including the US and India, banned the LTTE and stopped their funding avenues. Their front organisations were raided and made inactive. Several high profile LTTE operatives were arrested abroad and their weapons procuring plans thwarted. Sri Lanka’s friendly nations extended military assistance as well. Information sharing led to many setbacks to the LTTE. In the final stages, when certain countries wanted an end to hostilities for reasons best known to them, many other nations were with Sri Lanka. These same nations are now helping Sri Lanka to face the post-conflict challenges in the global arena as well.

Sri Lanka must continue to offer its unique insights to the problem of terrorism to other countries and clear any misunderstanding with regard to the process of national reconciliation. Recent developments show that a lot of people at the highest levels of international power either do not know about or deliberately under-estimate, Sri Lanka’s peace and reconciliation process. Sri Lanka did face a massive humanitarian operation as a result of the Tigers’ use of human shields, but the State is doing everything possible for the uplift of these citizens and their areas. Sri Lanka is healing the wounds of war, but it cannot be an overnight exercise.

In order to usher in a secure future, we essentially have to look to the past. We have to know where and why we have gone wrong and how those mistakes can be corrected so that terrorism would not ever take root in this country again. These ‘Lessons Learnt’ will be invaluable for a more prosperous future. A large number of eminent personalities and ordinary people have given their ideas on peace and co-existence. Reflecting and acting upon the lessons we have learnt will help us in the long term.

It would be easy and convenient to think that the end of terrorism is the only solution. But the Government as well as all right thinking citizens do not share this view. We must make use of the opportunity created by the elimination of terrorism to forge national unity and bring lasting peace. Thus the creation of a truly Sri Lankan identity is essential.

The day that all citizens call themselves ‘Sri Lankan’, there will be no need to talk about an ‘ethnic problem’. Sinhala, Tamil, Muslim or Burgher, we are all Sri Lankans. We may have separate cultural and religious identities, but we should be bound together by our love for the Motherland. ‘Unity in Diversity’ is not just a catchphrase, it is a realistic proposition that many countries have implemented successfully. Sri Lanka too can follow their lead, focusing on a home-grown initiative. That is the greatest tribute we can pay to the heroes who have sacrificed their lives to secure peace and freedom for the Motherland.

Peace is not only the absence of war – there are many other factors that contribute to lasting peace. It is also a state of mind. Thus the authorities alone cannot ‘establish’ peace – it should start from within an individual. Peace does begin at home. Peace in the community will essentially lead to peace in the entire country. If we still squabble over petty divisions, this will not happen. Now is the time to forget these differences and move on, as one nation, one people.

Indeed, Sri Lankans can now travel to, and settle down in, any part of the country they wish, be it North or South. The whole country is united again. This was unthinkable when terrorists had control over a considerable area. This has already led to the development of a healthy relationship between the peoples of the North and the South. Apart from that significant achievement, the economy has received a huge boost as the North and the East have re-entered the production process.

This economic boom is very important, for the North and the East need development on a massive scale, along with resettlement and rehabilitation. ‘These regions saw little or no development for almost 30 years. Consequently, they lag behind even the least developed parts of the South. Most infrastructure facilities, especially in the North, have to be built from the ground up. In other words, there is a chance to ‘build back better’, drawing on the lessons from the development process in other areas.

Physical development is not the only challenge for the North and the East. Moral development is equally important. There is a generation in the North that knows only about conflict. The LTTE recruited a large number of children to its fighting units, depriving them of their education and parental care. Improving educational facilities is a priority for post-conflict development. Twelve years down the road, a lot of progress has been made in this direction.

The Government has also rehabilitated ex-LTTE cadres and provided them with further education/employment options to enable them to leave their dark past behind. The society should not shun them because they are former cadres of a terror organisation. They should now be treated as good citizens contributing their mite to the country.

The defeat of terrorism by the valiant Security Forces in May 2009 has given us an opportunity to move forward rapidly to become an Asian powerhouse. In this context, it is heartening to note that they are in the forefront of the battle against the COVID pandemic as well. It is indeed praiseworthy that the very men and women in the Armed Forces who made peace possible are also channelling their time and energy to this effort. Lest we forget the sacrifice made by the Forces, we must seize this opportunity to come together as one nation, one people to see us through this global challenge. We must also forge a Sri Lankan identity, work towards reconciliation and enduring peace and ensure a brighter future for the next generation.