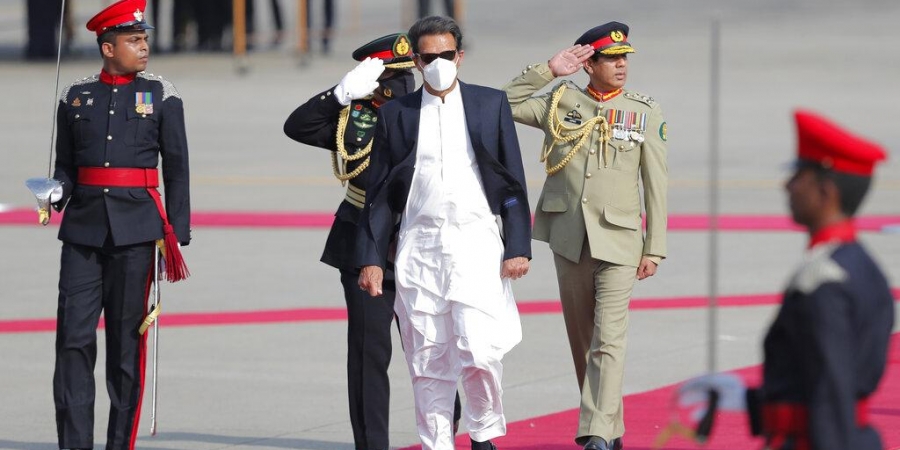 Sri Lanka this week welcomed the first Head of Government since the Coronavirus pandemic enveloped the country last year, according a warm reception to visiting Pakistani Prime Minister Imran Khan, who was in the country for a two-day visit that has attracted a great deal of interest.

Pakistani leaders have also visited Colombo for summits of the South Asian Association for Regional Cooperation (SAARC) and Pakistan was one of the few countries providing regular assistance to Sri Lanka during its nearly three-decade long war against the Liberation Tigers of Tamil Eelam (LTTE).

Prime Minister Khan himself is no stranger to Sri Lanka but that is due to his popularity as a cricketer. Khan’s exploits on the cricket field are well documented, culminating in him leading Pakistan to the country’s first and only Cricket World Cup win in 1992, a contest eagerly followed by Sri Lankans.

Prime Minister Khan has also been a keen supporter of Sri Lankan cricket. He first visited the country in 1976 with the Pakistani cricket team. Sri Lanka’s own World Cup victory under Arjuna Ranatunga in 1996 was in Lahore, Khan’s hometown and he was at hand to offer advice to the Sri Lankan players.

In this context, unlike his predecessors who visited Sri Lanka before him, Prime Minister Khan hardly needs an introduction to Sri Lanka. However, officials working in Colombo and Islamabad had to navigate through a few cross-currents to ensure that the visiting leader was welcomed warmly.

One issue that could have had the potential to pose a challenge was the directive to cremate all those who succumbed to the Coronavirus, based on expert health advice at the time. These regulations have been opposed by sections of the Muslim community and some Muslim political parties as well.

There were concerns at the highest levels in Colombo that interested parties could canvass this issue vehemently, making it impossible for the Pakistani Prime Minister to remain silent on the matter. This would have been embarrassing for both Governments as well as Prime Minister Imran Khan.

It was in such a context that Prime Minister Mahinda Rajapaksa assured Parliament that provision would be made for Muslims who fall victim to the Coronavirus to be allowed a burial. This was in response to a question raised by Samagi Jana Balawegaya (SJB) Parliamentarian S. M. Marikkar.

There has been some consternation since then with claims that the decision to allow burials has not been implemented as yet. While this is true, it is a matter of formulating the relevant protocols and procedures and then providing the necessary guidelines to implement them, officials say.

An expert committee headed by Microbiologist and former Dean of the Colombo Medical Faculty, Professor Jennifer Perera has concluded that both cremation and burial could be permitted under certain conditions. This is also in accordance with World Health Organisation (WHO) guidelines.

Government officials say that the issue is likely to be resolved in the coming weeks, when the necessary legal and administrative infrastructure- such as gazette notifications- are put in place. They note that the Pakistani Premier has been gracious to accept Prime Minister Rajapaksa’s assurances.

However, after some deliberation and dialogue between the office of the Pakistani Prime Minister and Sri Lankan authorities, Prime Minister Khan’s proposed address addressed to the Sri Lankan Parliament was taken off the visiting leader’s itinerary. This is what sparked the controversy.

The official reason, provided by the office of the Speaker Mahinda Yapa Abeywardena, was that it would be difficult to guarantee the safety of the visiting Prime Minister from the perspective of a Coronavirus risk. This would be extremely difficult considering the number of persons involved.

It was noted by Sri Lankan officials that Health Minister Pavithra Wanniarachchi and Minister of Water Supply Vasudeva Nanayakkara as well as several other staff in Parliament have been infected with the Coronavirus and Minister Wanniarachchi had to receive ICU care.

Therefore, inviting the 68-year-old Prime Minister Khan to the Sri Lankan Parliament was not the prudent course of action, Sri Lankan officials felt and this was conveyed to the office of the Pakistani Prime Minister. While Islamabad accepted this, it was the Indian media that attempted to capitalize on it.

They attempted to portray this as a move by Colombo to somehow indicate that Prime Minister Khan was not being given similar status to Indian Prime Minister Narendra Modi who was invited to address the Sri Lankan Parliament when he visited the country six years ago.

Most of these media outlets speculated that the visiting Premier would likely take the opportunity of an address to the Sri Lankan Parliament to raise the Kashmir issue Pakistan has with India, thereby attracting world attention to it. Colombo was anxious about this, Indian media said.

However, diplomats have noted that Prime Minister Khan is well versed in diplomacy and would have used an opportunity to address the Sri Lankan Parliament, had it eventuated, in the most appropriate manner and in a way that would not have caused embarrassment to the island nation hosting his visit.

Media reports, quoting unnamed sources, also claimed that Colombo was being careful not to “anger” India further. This was a reference to the recent decision by the Sri Lankan Government not to proceed with the agreement entered into by the previous Government to lease a part of the Colombo port (the Eastern Container Terminal).

For instance, the Hindustan Times said “there were elements within the Sri Lankan Government, who did not want the speech to take place as they feared that doing so could further harm ties with India, which have already been strained after the cancellation of a deal over the East Container Terminal”.

Diplomats however dismiss this type of speculation. They note that India understands and appreciates the reasons that led to the cancellation of the Colombo Port deal. Any move to invite the Pakistani Prime Minister to address Parliament would have little or no bearing on their perception, they say.

These diplomats have noted that India has in fact gone a step further to facilitate Prime Minister Khan’s visit to Sri Lanka. This was done by permitting the visiting leader’s Pakistan Air Force aircraft to use Indian airspace when travelling to Colombo, a practice that is not routinely adopted by Indian authorities. He would otherwise have had to take a more circuitous over-ocean route.

Despite these controversies Prime Minister Khan had a busy schedule in Sri Lanka in the two days that he spent in the island. He met both President Gotabaya Rajapaksa and Prime Minister Mahinda Rajapaksa. He also participated in a trade and investment conference in Colombo.

The visit by Prime Minister Khan comes at a time when Sri Lanka is the focus of attention at the United Nations Human Rights Council (UNHRC) where several “Core Group” countries are sponsoring a Resolution which is critical of Sri Lanka’s handling of the final Eelam War 11 years ago.

There has been an attempt to draft a ‘consensual’ resolution which would also have Sri Lanka’s support and endorsement. However, the proposed text of the resolution is such that Sri Lanka was not in a position to endorse it, Foreign Ministry officials in Colombo have said in recent weeks.

There is therefore the possibility that such a Resolution, proposed by a group of countries and opposed strongly by Sri Lanka, could be put to a vote at the upcoming sessions of the UNHRC. This is where Sri Lanka would require all the support it can get from countries it counts as ‘friendly nations’.

Prime Minister Khan is reputed as a charismatic and much respected leader especially in Islamic countries. It is recognised that he wields considerable influence over these nations and their support could be quite crucial in the event the proposed resolution at the UNHRC is put to a vote.

The visit by Pakistani Prime Minister Imran Khan is of great significance not only because Pakistan has always been a friendly nation and supported Sri Lanka’s cause generously but also due to the current attempts by sections of the international community to vilify Sri Lanka for crushing the LTTE.