A challenging week for Sri Lanka 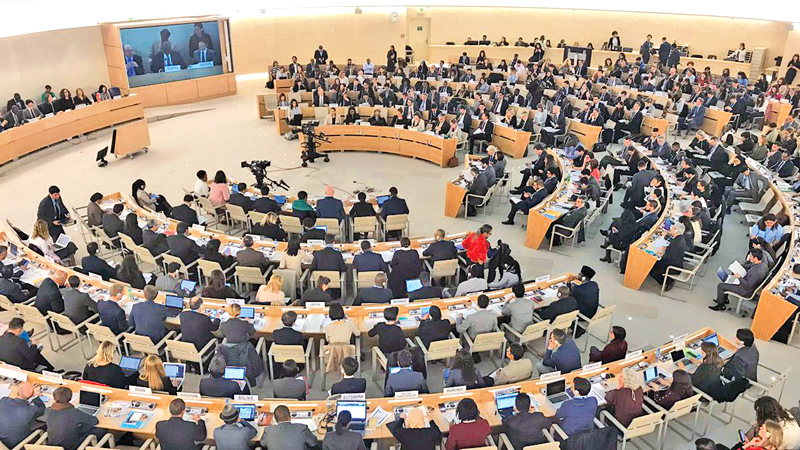 Sri Lanka faces a challenging task at the United Nations Human Rights Council (UNHRC) next week as it takes on Western nations which are proposing to pass a Resolution censuring the country for alleged human rights abuses, mostly during the final phase of the Eelam war 12 years ago.

The 47-member Council will vote on a Resolution, the text of which has been weighted heavily against Sri Lanka. The Resolution is now being led mainly by the United Kingdom, Canada and Germany. North Macedonia, Malawi and Montenegro are the other countries of this so-called ‘Core Group’.

In the lead up to the Resolution, the United Nation High Commissioner for Human Rights (UNHCHR), Michele Bachelet had released a report assessing Sri Lanka’s human rights record. Colombo considers this report extremely biased and founded on unsubstantiated accusations.

The UNHRC resolution on Sri Lanka, which is likely to be put to a vote on Monday is based on this report. Although Colombo has lodged a strong protest regarding the accuracy of the claims made in Bachelet’s report, the ‘Core Group’ countries and the Council have continued to rely on the report.

It is therefore no coincidence and hardly surprising that the report by Bachelet, a former President of Chile who has been the UN’s High Commissioner for Human Rights since 2018, and the resolution on Sri Lanka carry the same title: “Promotion of Reconciliation, Accountability and Human Rights.”

Initially there were some attempts to modify the language in the Resolution, in an effort to get Sri Lanka to agree with it. However, these efforts failed when the UNHRC remained intransigent regarding the text of some of the more contentious claims in the Resolution.

Colombo has noted that the conduct of the UNHRC has not been impartial in the events leading up to the resolution and the Government has raised at least two instances where the Council appears to be blatantly acting at the behest of certain countries, ignoring Sri Lanka’s requests for impartiality.

Despite this document being a formal response from a Government, this was initially not circulated to the members of the UNHRC. It took a statement from Foreign Minister Dinesh Gunawardena at a session dedicated to discuss the Resolution on Sri Lanka to rectify this serious anomaly.

In another detail that is detrimental to Sri Lanka, the proposed Resolution devotes an entire paragraph to what it calls “marginalisation and discrimination against the Muslim community” in the country. This is with reference to regulations banning burials following the COVID-19 pandemic.

The proposed resolution states that “Cremations for those diseased from COVID-19 have prevented Muslims and members of other religions from practicing their own burial religious rites, and has disproportionately affected religious minorities and exacerbated distress and concerns”.

It will be recalled that initial guidelines, formulated by health experts in the country, prevented the burial of those who succumbed to COVID-19. These guidelines were formulated based on the available evidence at the time for an illness that was still evolving and regarding which little was known.

This was however seen by some as a communal issue and the Government was accused of attempting to discriminate against the Muslim community. Since then, with more evidence becoming available, the Government has allowed burials and several such burials have been carried out.

Sri Lanka’s Permanent Representative at the United Nations in Geneva, C. A. Chandraprema has brought this to the attention of the UNHRC, noting that this item would be redundant at the time the Resolution is formally considered for adoption. Despite these objections, it is still being included.

This move to retain this clause when it serves no valid purpose has been interpreted in Colombo as a move by the ‘Core Group’ countries to enlist the support of Islamic nations to vote against Sri Lanka. These countries have historically been supportive of Sri Lanka at previous sessions of the UNHRC.

It may also be a reaction to Pakistani Prime Minister Imran Khan’s recent visit to Sri Lanka. Prime Minister Khan concluded a successful two-day visit to the country where bilateral relations were strengthened. The Pakistani Premier is reputed as wielding considerable influence over Islamic states.

Sri Lanka’s other neighbour, India, meanwhile has maintained a studied silence on what stance it will adopt. It is known that voting at the UNHRC often follows a pattern of different countries voting in ‘blocs’. As such, India’s position will have a significant impact on the votes of other countries.

Relations between Colombo and New Delhi have not been the best in recent months. This was after Sri Lanka refused to lease the Eastern Container Terminal (ECT) at the Colombo Port to Indian interests. It is expected that India will abstain from voting on the Resolution relating to Sri Lanka at the UNHRC.

These events have not helped diplomatic consultations regarding the UNHRC Resolution. The Government has strongly maintained that it will not barter away the country’s integrity or be intimidated by the threats of sanctions or proceedings against it in an international court of inquiry.

The Government has felt that the UNHRC, instead of being an impartial body that is focused on justice and fair play not only for all citizens but also for sovereign Governments, is being politicised by interested parties and certain countries to further their own agendas and political gains.

Foreign Minister Dinesh Gunawardena said the lead taken by the United Kingdom in the ‘Core Group’ was not desirable. “It is an unfriendly act by the United Kingdom as a member of the Commonwealth to lead a group sponsoring the Resolution which is intrusive and violates our sovereignty,” he said.

There were also concerns in Government that in an unrelated issue, the United Kingdom may lift the proscription on the Liberation Tigers of Tamil Eelam (LTTE). The ban was imposed in 2001 after lobbying by Lakshman Kadirgamar, then Foreign Minister in Chandrika Kumaratunga’s Government.

The United Kingdom’s Proscribed Organisations Appeal Commission (POAC), an independent body, has ruled that the Home Secretary must consider taking the LTTE off the Government’s list of outlawed bodies. Home Secretary Priti Patel has been ordered to review the ban on the terrorist group.

Also agitating for lifting the ban in the United Kingdom is the self-styled ‘Trans-national government of Tamil Eelam’ (TGTE), a grouping of LTTE rump organisations. The TGTE has launched legal action against the Home Secretary over the ban, saying the LTTE is no longer engaged in terrorism.

It is no co-incidence that among those campaigning vigorously against the Sri Lankan Government at the UNHRC is the TGTE. Its self-proclaimed ‘Prime Minister’, Visuvanathan Rudrakumaran was one of the first to respond to Foreign Minister Dinesh Gunawardena’s remarks to the UNHRC.

“The TGTE calls upon all Member States to introduce a new revised resolution that provides a clear path to justice, meets the Council’s obligations as also the global demand for referral of Sri Lanka to the International Criminal Court,” Rudrakumaran said, issuing a statement in response to the Minister.

There was also speculation that, while Sri Lanka remained strongly opposed to the UNHRC, it could potentially invite the UN Human Rights Commissioner Michelle Bachelet to visit Sri Lanka. This is being considered on the basis that the Commissioner could then “see for herself” the ground situation.

The matter is being discussed at the highest levels, officials said, but added that this has not been finalised. If a formal invitation is extended and High Commissioner Bachelet accepts, she would be the third UN High Commissioner for Human Rights to visit Sri Lanka in the last decade.

However, officials were quick to point out that any such visit, even if it does eventuate, would be after the ongoing sessions of the UNHRC. As such, it is unlikely to have any impact on the current Resolution before the UNHRC where Sri Lanka would require all the diplomatic support it can muster.

With these developments emerging in the corridors of power both in Colombo and in Geneva, the next days will see hectic diplomacy being conducted. The government is likely to go on the offensive, maintaining its stance that its actions in ending the Eelam war have brought peace to Sri Lanka.

Sri Lanka’s detractors consist mostly of the LTTE’s rump and, unfortunately, a group of nations that cater to their interests perhaps to seek electoral favours from large numbers of voters in those countries to whom they are beholden. However, Sri Lanka has insisted it will oppose the Resolution.

The next stage would be to assess the aftermath. Even if a resolution unfavourable to Sri Lanka is endorsed by the UNHRC, the real implications are unlikely to be daunting in comparison to setting in motion a chain of events that questions the country’s actions in winning the Eelam War.