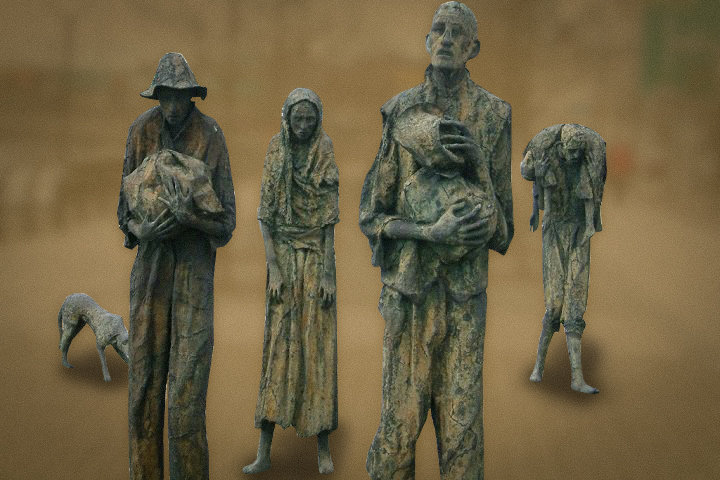 The document in the American Archives, reporting the widespread famine and spread of epidemic disease in Iran, estimates the number of the deceased due to the famine to be about 8-10 million.

One of the little-known chapters of history was the widespread famine in Iran during World War I, caused by the British presence in Iran. After the Russian Revolution of 1917, Britain became the main foreign power in Iran and this famine or–more accurately–‘genocide’ was committed by the British. The document in the American Archives, reporting the widespread famine and spread of epidemic disease in Iran, estimates the number of the deceased due to the famine to be about 8-10 million during 1917-19 (1), making this the greatest genocide of the 20th century and Iran the biggest victim of World War I (2).

It should be noted that Iran had been one of the main suppliers of food grains to the British forces stationed in the empire’s South Asian colonies. Although bad harvest during these two years made the situation worse, it was by no means the main reason why the Great Famine occurred. Prof. Gholi Majd of Princeton University writes in his book, The Great Famine and Genocide in Persia, that  American documents show that the British prevented imports of wheat and other food grains into Iran from Mesopotamia, Asia, and also the USA, and that ships loaded with wheat were not allowed to unload at the port of Bushehr in the Persian Gulf. Professor Majd argues that Great Britain intentionally created genocide conditions to destroy Iran, and to effectively control the country for its own purposes. Major Donohoe describes Iran of that time as a “land of desolation and death” (3). But this event soon became the subject of a British cover up.

Britain has a long record of its several attempts to conceal history and rewrite it in their own favor. The pages are filled with conspiracies that were covered up by the British government to hide its involvement in different episodes that would tarnish the country’s image. One of the clear examples is the “Jameson Raid”; a failed coup against Paul Kruger’s government in South Africa. This raid was planned and executed directly by the British government of Joseph Chamberlain under the orders of Queen Victoria (4) (5). In 2002, Sir Graham Bower’s memoirs were published in South Africa, revealing these involvements that had been covered up for more than a century, focusing attention on Bower as a scapegoat for the incident (6).

The records that were destroyed to cover up British crimes around the globe, or were kept in secret Foreign Office archives, so as to, not only protect the United Kingdom’s reputation, but also to shield the government from litigation, are indicative of the attempts made by the British to evade the consequences of their crimes. The papers at Hanslope Park also include the reports on the “elimination” of the colonial authority’s enemies in 1950s Malaya; records that show ministers in London knew of the torture and murder of Mau Mau insurgents in Kenya and roasting them alive (7). These records may include those related to Iran’s Great Famine. Why were these records that cover the darkest secrets of the British Empire destroyed or kept secret? Simply because they might ‘embarrass’ Her Majesty’s government (8).

A famine occurred in Ireland from 1845 until 1852 which killed one fourth of the Irish population. This famine was caused by British policies and faced a large cover up attempt by the British government and crown to blame it on ‘potatoes’ (9). The famine, even today, is famous in the world as the “potato famine” when, in reality, it was a result of a planned food shortage and thus a deliberate genocide by the British government (10).

The true face of this famine as a genocide has been proven by historian Tim Pat Coogan in his book The Famine Plot: England’s Role in Ireland’s Greatest Tragedy published by Palgrave MacMillan (11). A ceremony was planned to take place in the US to unveil Coogan’s book in America, but he was denied a visa by the American embassy in Dublin (12).

Therefore it becomes obvious that Britain’s role in Iran’s Great famine, which killed nearly half of Iran’s population, was not unprecedented. The documents published by the British government overlook the genocide, and consequently, the tragedy underwent an attempted cover-up by the British government. The Foreign Office “handbook on Iran” of 1919 mentioned nothing related to the Great Famine.

By ignoring Iran’s Great Famine in his estimations, Bharier’s work faces four scientific deficiencies. Bharier does not consider the loss of population caused by the famine in his calculations; he needs to ‘adjust’ the figure of the official census in 1956 from 18.97 million to 20.37 million, and this is despite the fact that he uses 1956 census as his primary building block for his “backward projection” model. He also ignores the official growth rates and uses his personal assumptions in this regard, which is far lower than other estimates. Finally, although Bharier frequently cites Amani’s estimates (14), in the end Bharier’s findings contradict that of Amani’s; notably Bharier’s population estimate for 1911 is 12.19 million while Amani put this figure at 10.94 million.

Despite deficiencies in the population estimates offered by Bharier for the period of the Famine and its earlier period, his article offers useful data for the post-Famine period; this is because these figures are generated from 1956 backward. That is to say, numbers generated from 1956 to 1919 are thus credible because they do not include the period of famine. Moreover, this portion of Bharier’s data are also true to that of the American Legation. For example, Caldwell and Sykes estimate the 1919 population at 10 million, which is comparitive to Bharier’s figure of 11 million.

Gholi Majd was not the first author to refute Bharier’s figures for this period. Gad G. Gilbar, in his 1976 article on demographic developments during the second half of the 19th century and the first decade of the 20th century, also considers Bharier’s estimates inaccurate for the period.

In an apparently biased review of Majd’s work, Willem Floor confirms Bharier’s model (15), despite its apparent deficiencies, and takes a mocking tone toward the well- documented work of Gholi Majd to undermine the devastation caused by the British-instigated famine in Iran, to the point of total denial of the existence of such a genocide. Floor also offers inaccurate or untrue information to oppose the fact that the British deprived Iranians from honey and caviar in the north, as he argues caviar was haram (religiously prohibited), while no such fatwa has ever existed in Shia jurisprudence and all available decrees assert that caviar is halal or permissible under the Islamic law. There was a rumor made up by Russians at the time, saying that Caviar was haram and Britain made full use of this rumor.

Another criticism made by Floor was to question why Majd’s work does not use British archival sources. A more important question is why Majd should have used these sources when they totally ignore the occurrence of the famine in Iran. The fact that Majd used mainly US sources seems to be reasonable on the grounds that the US was neutral toward the state of affairs in Iran at the time, and made efforts to help by feeding them (16).

*Sadegh Abbasi is a Junior M.A. student at Tehran University. As a student in history he has also worked as a contributor to different Iranian news agencies.