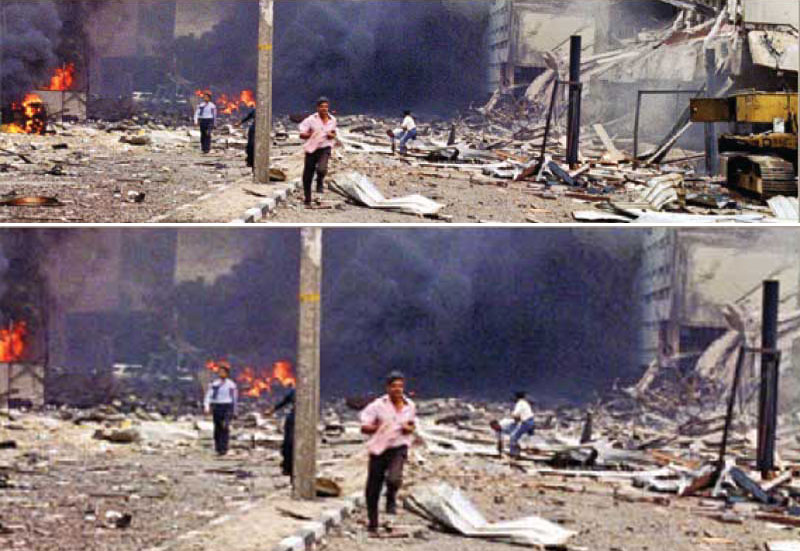 The Kent and Dollar Farm massacres were one of the earliest massacres carried out by the LTTE during Sri Lanka’s darkest era. The massacres took place on November 30, 1984 in two tiny farming villages in the Mullaitivu District.

This is just one of the barbaric acts of the LTTE. The majority of the individuals who were killed were innocent poor Sinhalese. There were elderly and sick people, infants, children, pregnant women and breastfeeding mothers among the civilians killed by the LTTE.

About 50 LTTE terrorists travelled in the night in two buses armed with rifles, machine guns and grenades. One of the buses went to Dollar Farm and the other to Kent Farm. The attacks were timed to start at about the same time in the early hours of the morning. The LTTE fighters shot and killed the guards, the women and children and most of the male members of the families. Some of the prisoners were thrust into a room in a building and blasted with explosives. Sixty-two Sinhalese including three jail-guards were killed. The second bus proceeded to the Kent Farm eight kilometres away and killed 20 more home guards.

The police and the troops conducted a cordon and search operation and the government announced that the troops had killed 30 terrorists. The death toll of Sinhalese civilians killed by the LTTE attack numbered 62 males, mostly armed home guards and others.

The Kokkilai massacre was also carried out by the LTTE. The massacre took place on December 1, 1984, in which the LTTE cadres massacred several Sinhalese civilians. This attack occurred on the day after the Kent and Dollar Farm massacres took place. Most of the victims were Sinhalese fishermen who were shot to death by LTTE cadres. Several civilians were killed including 31 women and 21 children. The attack left several civilians including women and children dead and their property destroyed.

The LTTE did not stop there. They launched a huge international level campaign, stating that the massacre was carried out by the Sri Lankan Armed Forces. Fabricated information and fabricated photos were used to carry out this campaign. One of the main aims of this campaign was to mislead the world and make the world believe that the majority of Sri Lankans, who are Sinhalese, try to capture lands belong to Tamils. When the LTTE failed in every way to make the world believe this lie, they started many other tactics such as the destruction of historical Buddhist sites which had archaeological evidence for the real Sri Lankan history. The LTTE encouraged Tamil people to build their religious shrines, destroying historical archaeological sites, especially Buddhist temples. The majority of the destroyed places were ancient Buddhist temples which stood against the LTTE’s fabricated ‘history’ of Sri Lanka.

The LTTE hacked to death a large number of civilians, especially helpless elders, sick people, infants, pregnant mothers, from all ethnicities and religions who lived in the North and East, from time to time during the 30-year armed conflict. The villages located adjoining the areas held by the LTTE were called ‘border villages’.

These border villages were like a part of hell because the devils can appear at any time and kill people. The people in those border villages left their homes at night and spent the night in thick dangerous jungles and treetops in order to protect their lives from the LTTE. But some such as the elderly, the sick, the disabled, infants and pregnant mothers could not do it. The LTTE cadres came at night and hacked them to death. They died in a very painful way after suffering for hours without being able to get help from outside. Maybe they died in the most painful way possible for a human being.

Buddhist Bhikkus who lived in those border villages did not leave their temples because they wanted to protect the innocent poor people belonging to all ethnicities. They stayed back and faced the brutality of the LTTE while protecting people and priceless historical archaeological sites which provided concrete proof to the real Sri Lankan history. The LTTE tried its best to fabricate a new Sri Lankan history in order to help their claim for the land but the ancient historical archaeological sites stood against those attempts, providing evidence for the true Sri Lankan history. Still, some Tamil politicians try to fabricate our history. For many years they have been trying to apply Gobble’s Theory and make the international community believe their fabricated history.

Suicide bombing was a popular tactic of the LTTE between 1980 and 2000. The LTTE carried out 168 suicide attacks causing heavy damage to civilian, economic and military targets. The Sri Lankan economy and the Sri Lanka Army were targeted on numerous occasions, including during a high-profile attack on Bandaranaike International Airport (BIA) in 2001 that caused damage to several commercial airliners and military jets.

The LTTE was also responsible for an attack in 1998 on the UNESCO World Heritage Site Sri Dalada Maligawa that killed eight devotees. The attack was symbolic due to the fact that Sri Dalada Maligawa is the holiest Buddhist shrine in Sri Lanka. Other Buddhist shrines which were attacked are Jaya Sri Maha Bodhi and Sambuddhaloka Temple in Colombo. The LTTE hijacked a bus on May 14, 1985 and entered Anuradhapura. As the LTTE cadres entered the main bus station, they opened fire indiscriminately with automatic weapons, killing and wounding many civilians who were waiting for buses. The LTTE cadres then drove to Jaya Sri Maha Bodhi and gunned down Buddhist Bhikkunis, Buddhist Bhikkus and civilians who were worshipping while observing Sil. Before they withdrew, the LTTE strike force entered the National Park of Wilpattu and killed 18 Sinhalese in the forest reserve. The LTTE cadres massacred 146 Sinhalese men, women and children in Anuradhapura.

After 2015, arrangements were made to pay compensation to LTTE terrorists who killed thousands of civilians while ignoring innocent poor civilians who escaped from those massacres. The heroic armed soldiers who protected them were punished by the Yahapalana Government by imprisoning them and not giving bail. Even the family members such as old parents, wives, children of those heroic soldiers were harassed. Some of those family members such as old parents died due to the severe mental agony they underwent after seeing the plight of their beloved sons who sacrificed their precious lives and who became permanently disabled while protecting the motherland.

Heroic Armed Forces of Mother Lanka put an end to the brutal terrorism of the LTTE on May 18, 2009, under the leadership of the then President and the current Prime Minister Mahinda Rajapaksa and the then Defence Secretary and the current President Gotabaya Rajapaksa. They sacrificed over 26,000 precious young lives to save our Motherland. Several War Heroes became permanently disabled. The blood and sweat shed by them in order to protect innocent poor Sri Lankan people and the Motherland was underestimated during the 2015 – 2019 period. Some of them were imprisoned for saving the Motherland and people’s lives. But, on November 16, 2019, Sri Lankans did justice for those precious lives lost and shattered. On August 5 this year, the people of Sri Lanka once again proved that they really concern about our motherland.