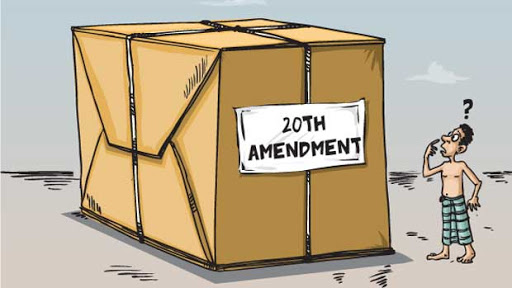 As such, the 20th is an improvement, simply because every single member is answerable to the voter

Regime-loyalists were routinely penciled in when ‘independent’ commissioners were appointed

When constitutional amendments are proposed and they are made public in draft form, there is a general rule of thumb that can be employed to figure out where one should stand — for or against. It goes like this: You disregard whether or not you are generally in favour of the immediate would-be beneficiary or beneficiaries in the political order; instead you ask yourself a simple question, ‘what if was in power right now?’

That’s my first comment on the proposed 20th Amendment and it is a general one. I’ll get to the specifics presently.

Speaking generally, we have had 19 amendments to the Second Republican Constitution (the JRJ Monster, if you will). The 13th had Indian Hegemony written all over it. The 17th was not politician-friendly but it had certain flaws. The rest were all about political conveniences; they were designed to serve the interests of the particular regimes and leaders thereof at the particular time.

The most important elements of the 19th have remained: term limits for the president, and the Right to Information Act

The 20th is spoken of in relation to the 19th, 18th and 17th amendments. Now many who voted for the 17th also voted for the 18th and 19th and are likely to vote for the 20th when it comes up in Parliament shortly. Some have duly criticised the previous amendment but none have been self-critical.

As for the critics who are not career politicians, their behavior would be hilarious if it didn’t smack of shameless political sycophancy. For example, we had people criticising the 19th who maintained a dead silence about the 18th or else showered it with praise. Today we have people calling the 20th a partisan piece of legislation but when the 19th came up they did not have the eyes to see regime-interest that was scripted in. As for the 17th, few if any pointed out its flaws. When the 18th came up, they suddenly invoked various articles in the 17th and said that only the defeat of the 18th would prevent the death of democracy. The 17th was invoked when the 18th was dumped for the 19th, principally on account of the rehabilitation of ‘independent institutions.’

So what of the 20th (outside of politically and ideologically compromised criticism/critics)?
The most important elements of the 19th have remained: Term limits for the President, and the Right to Information Act. The CPA has noted this. Good. The CPA has, correctly, pointed out that wording related to ‘Urgent Bills’ can effectively impair pre-enactment review. This is dangerous. The shout, however, has been about independent institutions, with a compare-contrast of the composition of the Constitutional Council (19th) and the Parliamentary Council (20th).

The critics are upset over the power of the President to dissolve Parliament after one year (as opposed to four-and-a-half as per the 19th). In effect, dissolution over frivolous reasons, are highly unlikely to create a president-friendly parliament through elections

Well, the UN High Commissioner for Human Rights, Michelle Bachelet, has expressed concerns. So has the Centre for Policy Alternatives (CPA). It’s likely that Bachelet takes her cues from locals aligned with her agenda, which is why she gets things twisted at every turn (e.g. the Mannar mass graves). She may or may not have communicated with the CPA before she penned her ‘Sri Lanka story’ for the UNHCR sessions currently underway in Geneva, but it is likely that she was briefed by the so-called ‘civil society’ in Colombo who suffer periodical myopia (when the UNP is in power) and get hysterical when their darlings are in the Opposition. We are not saying ‘OMG, something must be wrong if Bachelet herself is worried!’

She believes that the 20th would negatively impact the independence of key institutions. Not surprisingly, this is a worry shared by the CPA (‘it abolishes the binding limitations on presidential powers in relation to key appointments to independent institutions through the pluralistic and deliberative process of the Constitutional Council’). The CPA whines about the 20th ‘politicising institutions meant to function independently of the political executive and for the benefit of citizens.’

That last line is problematic. It implies that politicians necessarily act against citizens’ interests, that it’s about benefit for self and not citizen. The regime that midwifed the 19th did nothing for the benefit of citizens (and the citizens effectively said so on February 20, 2018, November 16, 2019 and August 5, 2020).

Now, the institutional arrangement, the constitution and the political culture confer massive edge to politician over citizen. Manifestos cease to matter after elections, said Mangala Samaraweera (a good friend of Bachelet’s bosses in Washington and a political ally of the CPA). Mandates are routinely mangled and reinterpreted, a reality which backfired on the yahapalana constitutional-tinkerers eventually. On the hand, people elect representatives. They can elect them and they can throw them out of power using the ballot. That’s a check, that’s a balance, ultimately. That’s where accountability is actually obtained.

The problem is the interim, the period between elections. This is where the independence or otherwise of key institutions becomes an issue. The CPA claim is that the Constitutional Council (under the 19th) had a pluralistic and deliberative process in relation to key appointments to independent institutions. The equivalent in the 20th (Parliamentary Council), in contrast, the CPA claims ‘is a mere a rubber stamp of the executive, with no genuine deliberative role envisaged for its members.’

It’s all about composition. The Constitutional Council made a mockery of the term ‘independent.’ The politicians were government-heavy (the Parliamentary Council gives ruling part only a minimum edge of one) and the civil society representatives were essentially buddies of the regime — promoters, approvers, defenders and hosanna singers. As for deliberation, you can talk until the cows come home, but what matters is whether or not regime-interest prevailed. It did. Always. Regime-loyalists were routinely penciled in when ‘independent’ commissioners were appointed. That’s rubber-stamping in cute form, but rubber-stamping nonetheless.

As such, the 20th is an improvement, simply because every single member is answerable to the voter.

The sameness obviously means that the issue of interim-accountability remains unresolved by the 20th. The answer would have to be measures that institutionalise meritocracy. Politicisation post-independence wrecked that. Amendments from the 17th to the 19th sought to go around the problem. The 20th doesn’t resolve it.

The critics are upset over the power of the President to dissolve Parliament after one year (as opposed to four-and-a-half as per the 19th). In effect, dissolution over frivolous reasons, are highly unlikely to create a president-friendly parliament through elections. In all the years since 1978 when the one-year rule existed not once was it abused, one notes.

There are concerns that the 20th removes the necessity for the President to obtain the views/recommendations of the Prime Minister. What’s strangely left out by the objectors is the fact that the President himself is elected and by the entire country. The implication however is that Parliament is representative and the President is not or is somehow a representative of a lesser kind. This ‘concern’ is symptomatic of the basic yahapalana malady that infects most anti-20th critics: the 19th, for them, was a mechanism to empower Ranil Wickremesinghe (the man and not the position) and cripple Maithripala Sirisena (both man and position). We know how that particular experiment went (wrecking sovereignty and re-inventing terrorism, e.g. Easter Sunday attacks by Islamic Fundamentalists).

The yahapalana-drunk critics miss the point and offer nothing more than a distraction from constructive criticism.
The 20th, with regard to independence of key institutions, in composition and (probable) effect is no better and no worse than the 19th. The thinking-limits that produced the 19th and 20th need to be expanded to resolve the problem these amendments claimed to attempt.

The same goes for removing the limit on cabinet size. Wrong. Dead wrong. Best to legislate by name a limited number of ministries. That could hold. The yahapalana limitation was a farce thanks to the interjection of the ‘national government’ clause (note: the UNHRC nor the CPA nor the most vocal critics of the 20th have uttered a word about this).

Finally, there’s the issue of dual-citizens. A dual citizen cannot be a lesser citizen, it’s as simple as that. The clause was brought in through the 19th to checkmate presidential ambitions of two prominent dual citizens, Gotabaya Rajapaksa and Basil Rajapaksa. That’s not ‘enlightened’ constitutional reform. It’s crude and partisan and ultimately detracts from the positives.

One hopes that critics wide-eyed about the 19th and teary-eyed over the 20th, rise above the pettiness and dismay over outcome-preferences not materialising. Well, they could step aside so that they won’t get in the way of legitimate objection.