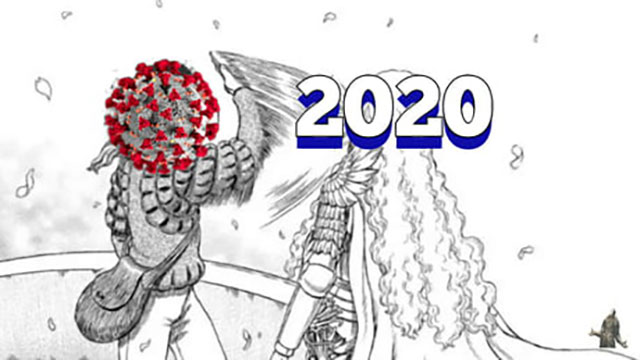 Year-end roundups by capitalist media can make you forget the real 2020. Time magazine’s cover has a buy-two-whites-get-one-darkie free deal: Kamala as beige Barbie joined at the lip to GI Joe.

Time-Life-Fortune magazines were set up in the 1920s USA by the (anti-)China Lobby: A farrago of gunboaters, evangelicals, opium-dealing warlords and anti-communists, financed by the Rothschild bankers’ New York pitbull JP Morgan.

They wished to prevent post-Qing China freeing itself from foreign bondage: England had waged two 19th century wars on China to sell ‘Indian’ opium there. Now liberal buzzwords, ‘Equal Opportunity,’ were first coined by the US, demanding the right, like older imperialists England, France and Germany, to carve China up.

Their ‘forever wars’ aim to stunt the future of unemployed millions. Capitalists always support both sides of whatever sides to ensure it’s not against them! They keep filling the airwaves with unreason and lies about non-European, non-settler countries.

Capitalists here want more ‘flexibility’ to destroy unions.  Yet, every VIP has a union. The first union registered here in colonial times was the Employers Federation of Ceylon. Bankers, merchants, planters, lawyers all have unions: they just call them Associations, Chambers, Boards of Trade, etc.

The whites meanwhile promote ‘protests’ – Hongkong, Thailand, Belarus, Lebanon… But these ‘protestants’ are not grassroots, but artificial rhetoric-spouting ‘astroturf.’ To isolate real change they genetically engineer: “fifth columnists of the postmodern kind.”

Change they can believe in.

Their ‘hooded’ protesters are salaried agent-provocateurs of the corporate state: Recall the 19th century night-riding Ku Klux Klan set up to remodel 19th century US slavery. The 20th-century ‘death squads’ to behead socialism. And now so-called rock-throwing 21st century ‘anarchists’ who pave the way for tear gas and skull-cracking helmeted riots squads of the ‘liberal democracies,’ plus those who spout homilies to invite NATO’s flying panzers.

When the white man sneezes, we catch Covid. As the economist SBD de Silva’s Political Economy of Underdevelopment notes: “In virtually every colonial territory a certain number had to be killed before the survivors would accept the new prospects.  This might even be said to introduce a new concept into the study of political economy – the indispensable minimum of murder.” Hence, the regular culling every 20 years of the most advanced workers and youth here.

The current crises of capitalism are rooted in the world’s division of labor shifting. Over the last two centuries, products manufactured in Europe and Euro North America were exchanged on increasingly unequal terms for our primary goods, tea, rubber, coconut, etc.

Apartheid in nuclear-armed South Africa was toppled, not only because Cuba and Angola annihilated the South African army in the famed 1988 battle of Cuito Cuanavale. Paying white workers more, when neighboring African workers can manufacture for less, makes such precious privileges untenable.

China began making cars costing a fraction of the US car industry, making the General Motors Corporation (GM), whose revenues are greater than half the globe’s countries, presumably crash. US and Canadian governments rushed to rescue– not workers or shareholders – but investors in GM’s more ‘profitable’ Asian units!

Recall: “What’s good for GM is good for the USA!” Recall all the capitalist media flatulence about government not interfering in the state? Yet private banks actually own those countries, and will be bailed out by the state.

The Panchikavatte of the Mind – Protecting modern industry is symbolic of advanced societies? Industrialized countries legally prevent foreigners selling cars or other goods in their home markets. ‘Content’ laws ensure a certain percentage of imports have to be manufactured inside their country. Google searches rarely yield references to ‘content laws’. This is why ‘content’ laws are crucial.

Every car has at least 2,400 parts. Each part made to be broken. It’s called “planned obsolescence.” Wasteful? The US auto industry also keeps shifting manufacture to break unions: Outsourcing to ensure US superprofits.

Parts for early cars imported could be made at some handhiya or another. Not anymore. When one ship unloads usually-used vehicles sailing into Colombo from Japan, 10 ships trawl behind, with auto parts. Panchikavatte – where cowries were gambled, Mecca of auto parts – is the most expensive real estate in the country, more pricey than even Colombo 7! The second-most expensive real estate, Kanatte, also disposes dead body parts.

Sri Lanka is a cemetery for Japan’s auto car industry. Japan provides no room for US-style junk yards or graves. So they dump old cars onto this country, at a profit! Highly industrialized Japan treasures its well-educated workers. Their tea workers drive to work – selling their old jalopies to tea estate managers here!

One day we’ll truly build vehicles from start to finish. We’ll honor our ancestors  and call our first automotive brand: Yaka – but only for public transport!

Our media will have their own annual cover of the year: A yakini driving a yaka bus, naga dreadlocks flying in the air. She’s not hooded, but she wears a lovely ves muhuna.